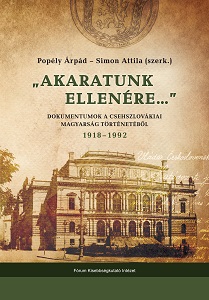 Documents from the History of Hungarians in Czechoslovakia 1918-1992

Contributor(s): Attila Simon (Editor), Árpád Popély (Editor)
Subject(s): Interwar Period (1920 - 1939), WW II and following years (1940 - 1949), Post-War period (1950 - 1989)
Published by: Fórum Kisebbségkutató Intézet
Keywords: documents;history of Hungarians in Czechoslovakia;hungarian minority; history of 20th century;
Summary/Abstract: In the year 2020, the Hungarian nation throughout the world commemorates the 100th anniversary of the Treaty of Trianon. As a result of the diktat designed with reference to the right of nations to self-determination, but at the same time defying this principle, not only the borders of Hungary were changed, but—against their will—one third of the Hungarian nation was driven into minority position, including the Hungarian population of Upper Hungary. The Treaty of Trianon, signed on 4th June 1920, thus provided a decisive contribution to the birth of the Hungarian minority community in the former Czechoslovakia, the present Slovakia.To date, no comprehensive monograph or collection of documents on the history of the Hungarian nation´s segment falling under Czechoslovakia has been published. This prompted the Forum Minority Research Institute to gather and present to readers in one volume the most important sources on the history of the Hungarian minority community now living in southern Slovakia, from the founding of the Czechoslovak state in 1918 until its dissolution in 1992.The size constraints did not, of course, allow the publication of all the documents considered important, so documents consisting of only a few lines on the one hand and the too voluminous ones on the other hand were left out of the volume. The published documents were selected in such a way that they provide a comprehensive picture of the history of the Hungarian minority community and present the most important issues of its seventy-five years existence within the Czechoslovak state. Some of the omitted documents are presented in the form of illustrations.The vast majority of the documents included in the collection come from the archives of Slovakia, the Czech Republic and Hungary, and partly from the contemporary Hungarian press in Czechoslovakia. Some of them have already been published in various collections of documents, but there are some among them which have been unknown not only to a wider readership, but also to historians. Most of the documents come from the most dramatic and hectic periods in the history of the Hungarian minority, i.e. the years following the formation of the Czechoslovak state, the period of the first Vienna Award, the years of post-World War II disenfranchisement, the Prague Spring and the regime change.The volume consists of five chapters, adapted to the general historical eras of Czechoslovakia. The first chapter contains documents on the First Republic, the second on the Slovak autonomy and the Slovak State, the third on the years after the Second World War, the fourth on the decades of the communist dictatorship, and the fifth on the years between the regime change and the dissolution of Czechoslovakia. Each document is preceded by the place and time of its origin, followed by a brief introduction to interpret and place the document in historical context. The documents are followed by references indicating their current location. At the end of the collection, there is a selected bibliography containing the most important pieces of academic literature on the history of Hungarians in Czechoslovakia.