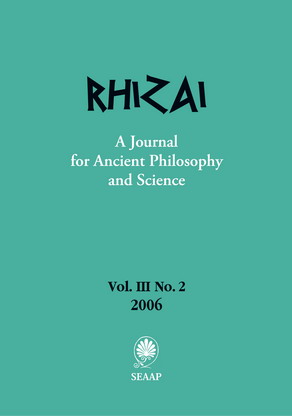 Summary/Abstract: The paper investigates the notion of friendship (philia) in Aristotle’s moral philosophy. The key issue here is what role Aristotle attributes to the ‘other’ as friend in the self-appreciation of the moral individual. The discussion proceeds in three main steps: first I chart the anthropological connections of the Aristotelian notion of friendship; then I delineate in detail the discussions of self-knowledge and self-cognition in the framework of Aristotle’s ontology and philosophy of perception; finally, I set out what consequences Aristotle’s repeated assertion that ‘the friend is another self’ has for the self-understanding of the person. Through these steps I argue for the conclusion that the friend, as the ‘other’, plays an indispensable role, on the one hand in the formation of virtues which are required for right action, on the other in allowing the person to reach self-consciousness and freedom, both of them prerequisites for happiness in the full sense of the term.

Journal: Rhizai. A Journal for Ancient Philosophy and Science