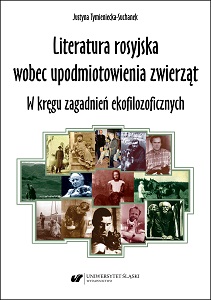 Author(s): Justyna Tymieniecka-Suchanek
Subject(s): Language and Literature Studies, Studies of Literature, Russian Literature
Published by: Wydawnictwo Uniwersytetu Śląskiego
Keywords: Russian literature; Eco‑philosophical issues
Summary/Abstract: The research is devoted to the selected problems related to eco‑philosophical issues analysed on the basis of Russian literature of the last two centuries — issues so far absent in literary studies discourse of the contemporary Polish and European Russian studies. The author searches and analyses philosophical problem concerning relation and interaction between people and animated nature represented mainly by animals, with consideration of assessment and moral qualification of human actions resulting from this relation (eco‑ethics). The purpose of the thesis is to determine and understand quality of human existence and coexistence with other species on the basis of selected literary works (prose and poetry) as well as journalism.This interdisciplinary thesis combining the disciplines of literary studies and natural history, is an attempt to contribute to the studies called the Third Culture (term introduced by John Brockman) which includes various disciplines of natural science (and exact sciences) and humanities. The lecture given by Charles Snow at the end the fifties considerably contributed to the rapid development of these disciplines. Snow distinguished and described growing split between two cultures: traditional humanities and sciences. At present these sciences and humanities create one current in culture — the Third Culture. Its representatives synthetically combine in their work various disciplines depending on current needs. In Brockman’s opinion in humanistic science, whose representatives have hermetic and marginal disputes, old ideas are only transformed while in natural sciences creative questions are put, new information appears and problems are formulated anew. Nowadays, according to Brockman, the Third Culture strongly attracts the representatives of humanities who think that ideas should be verified in compliance with empirical facts, and everything humanities are concerned with (e.g. literary studies) should take account of achievements of natural sciences. The author takes into consideration achievements of socio‑biology, zoosemiotics and cognitive ethology — sciences exploited by eco‑philosophy. The thesis presents the relation ‘human being – animal’ in a historical process against the background of the development of philosophical and natural sciences. Therefore, an arrangement of the material is determined by non‑literary phenomena, e.g. Darwin’s theory of evolution. The thesis consists of four chapters. In the first chapter — Individual and species subjectivity of animals. Moral status of animals against the background of the development of eco‑philosophical thought (not only Russian) — the author attempts to describe animals as a subject, taking into consideration various concepts of subjectivity of animals, to determine the place of an animal in philosophy of nature over the centuries, and to analyse an attitude towards animals in Russian philosophy (e.g. Vladimir Solovyov, Vasily Rozanov, Pyotr Kropotkin). The second chapter — Animal as a person / thing / inferior existence in Russian literature of the second half of the 19th century. Lev Tolstoy, Fyodor Dostoyevsky and others — is devoted to the review of the relation ‘human being – animal’ in the works of the title corypheuses and writes such as Nikolay Shcherbina, Ivan Turgenev, Vladimir Sollogoub, Anton Chekhov, Vsevolod Garshin, Vladimir Chertkov. The third chapter — Russian literature of the first half of 20th century about “younger brothers”. From Velimir Khlebnikov to Daniil Andreyev — describes problems concerning overcoming anthropocentrism in relations between people and animals, hunting, vegetarianism and cruelty to animals. The starting point for the discussion are works of the writers: Khlebnikov and Andreyev. The above issues are also analysed on the basis of the works of Mikhail Artsybashev, Sergei Yesenin, Andrei Platonov, Alexander Dobrolubov, Nikolaj Zablocki, Lidija Zinov’eva‑Annibal, Jelena Guro, Aleksandr Kuprin, Mikhail Prishvin and others. In the fourth, the most extensive chapter — Influence of the 20th century experiences on the eco‑ethical tendencies in the post‑war and contemporary Russian literature. From genocide to bioethics — the author makes attempts to show an animal as a victim of war, gulag, starvation, collective farming and civilization development in the works of Viktor Afanasyev, Anastasia Tsvetaeva, Varlam Shalamov, Vladimir Tendryakov, Valentin Rasputin. The last chapter is devoted to the interpretation of the complex relation ‘human being – animal’ not only in extreme conditions but also in ordinary, unexceptional ones, e.g. in the works of Chyngyz Aitmatov, Andrei Bitov, Svetlana Vasilenko.The thesis reflects human attitude towards animals in the works in which an animal has not been presented as a mask, symbol, allegory but as an animal in the literary sense. Therefore, the works presenting images of animals which have nothing to do with ethological truth (e.g. fable) have not been taken into account in this thesis. It represents modern trend of posthumanities. Posthumanities is an ethical and intellectual attitude which among others supports scientifically and legitimizes actions aimed at protecting various species, and which promotes studies in ‘human being — animal’ relations called in short animal studies. The studies originated in the western intellectual thought long time ago and nowadays they are defined as interdisciplinary studies and institutional academic discipline in the academic process. The thesis is aimed at propagation of the studiesin Poland.The author tries to prove that in the Russian literary works an animal is not merely a pretext for exploring extensive implications of the ideology which rejects both instrumental, purely utilitarian attitude towards animals and primitive or sentimental anthropomorphism and introduces instead thinking which is rational, scientifically justified and ontologically and ethically prolific.