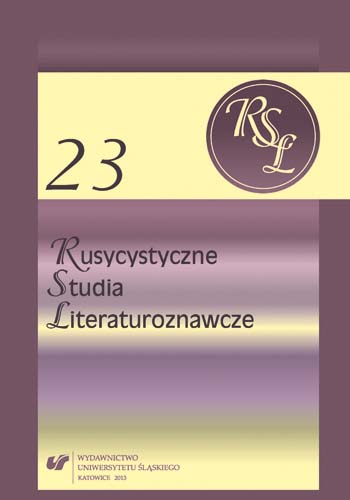 O psich kloszardach w przestrzeni miejskiej. Na materiale opowiadania "Oczy bezdomnego psa" Anatolija Kima
On dog tramps in a city space. On the basis of a story "The eyes of a stray dog" by Anatoly Kim

Summary/Abstract: The article analyses the problem of dog homelessness in a city on the basis of a story "The eyes of a stray dog" by Anatoly Kim. The story belongs to the cycle "A walk around the town" written at the turn of the 1970s and 1980s. The writer was interested in people’s attitude to animals and its ethical dimension. In an artistic space of A. Kim’s work we deal with the opposition: at home (in a flat)-outside home (in the street)which is juxtaposed with the fate of two dogs, namely a male dog called Gaja and a female dog called Ryża that are taken care of by the same person, that is Barbukin. The main protagonist is a social activist in the animal care association. The analysis conducted showed that the street as an external space in a spacious model of the story world takes place the main place. The street is a hostile space — a symbol of life of those dog tramps thrown away beyond the margins of civilization belonging to the worse and subordinate reality. A stray dog, accordingly, belonging to the “margin of the animal community” is perceived here as a prick of conscience of a human being these days. Besides, the very work confirms the researchers’ opinion who treat Kim as a bio-centric writer.