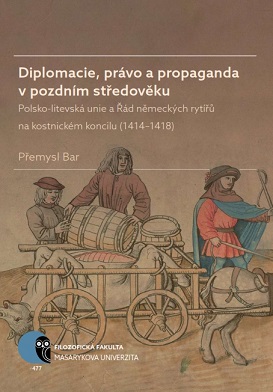 Author(s): Přemysl Bar
Contributor(s): Jana Horáková (Editor), Katarina Petrovićová (Editor)
Subject(s): Politics / Political Sciences, Politics, History, Social Sciences, Political Theory, Sociology, Diplomatic history, Political history, Middle Ages, International relations/trade, Politics and law, Politics and communication, Politics and society, 15th Century, Sociology of Politics
ISSN: 1211-3034
Published by: Masarykova univerzita nakladatelství
Keywords: Diplomacy; law; propaganda; late middle ages; 15th century; political history; diplomatic history;
Summary/Abstract: This book presents a comprehensive analysis of the diplomatic and judicial controversy between the Teutonic Order in Prussia and the Polish-Lithuanian Union at the Council of Constance (1414–1418). This dispute is approached from three basic perspectives which intertwine with one another: diplomacy, law, and propaganda. The study of the envoys and their communication with the centres of decision-making serves to explore the diplomatic sphere of the conflict. The legal framework of the controversy was formed by the negotiations about the extension of the existing truce between the two rivalling powers, by diverse attempts of arbitration, and especially by the pending doctrinal litigation. The propaganda developed by the Polish-Lithuanian delegation revolved essentially around the question, whether the Polish or the Order’s concept of the Christianization of Eastern Europe was more successful. An extensive catalogue of treatises, polemics, complaints, and other texts, which were composed in connection with the Constance dispute, forms a major part of the book.