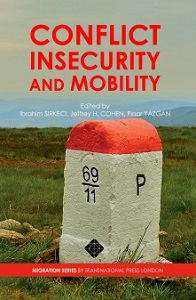 Contributor(s): Ibrahim Sirkeci (Editor), Jeffrey H. Cohen (Editor), Pinar Yazgan (Editor)
Subject(s): Politics / Political Sciences, Politics, History, Social Sciences, Geography, Regional studies, Governance, Sociology, Recent History (1900 till today), Security and defense, Military policy, Studies in violence and power, Migration Studies, Inter-Ethnic Relations, EU-Accession / EU-DEvelopment, Ethnic Minorities Studies, Geopolitics, Politics and Identity, Peace and Conflict Studies
Published by: Transnational Press London
Keywords: Turkey; Kurds; inter-ethnic relations; minorities; migrations; rights; identity; politics; conflict; borders; Turkish-Greek border; EU accession; Syria; military service; Shemdinli;
Summary/Abstract: Theories and models of contemporary migration often revolves around neofunctional models. They define migrants as rational actors who are focused on improving their economic, social, and political well-being which is enabled by access to opportunities that are not available in their origin communities and/or countries. Nevertheless, initiation of migration is largely driven by difficulties, discomfort, disagreements, tensions, and conflicts at the origin, while migration decision and destination choices are moderated by individual characteristics, cultural and social capital as well as by the local, national, and international context. In other words, people do not move when they are satisfied and comfortable with what they have and where they are. The number of movers around the world is relatively very small. The costs of migration and other moderating effects make international population movements an exception even today with an ever increasing mobility across the world. “The studies collected in this edited book offer evidence to our argument that migration does not provide an ultimate response to insecurities in the home countries or conflicts in traditional destinations; instead as hinted in some of the contributions, migration shifts the balance of power and security as insecurity and conflict are negotiated in the process of migration with particular reference to the Kurds and Kurdish migration.”

Distance beyond the border: Kurds of Syria and Turkey in Istanbul

Development, security and the role of Frontex on the Turkish-Greek border

Perspectives on conflicts and potentials in a changing neighbourhood: Berlin-Neukölln and the role of urban governance

The Kurds: “A history of deliberate and reactive state-lessness”

As if all life had vanished... The return of Kurdish villagers to their hometowns

Perspectives on communal violence against Kurds in Turkey