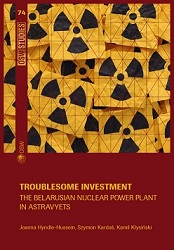 Author(s): Joanna Hyndle-Hussein, Szymon Kardaś, Kamil Kłysiński
Contributor(s): Wojciech Konończuk (Editor), Adam Eberhardt (Editor), Halina Kowalczyk (Editor), Katarzyna Kazimierska (Editor), Anna Łabuszewska (Editor)
Subject(s): Politics / Political Sciences, Politics, Economy, Law, Constitution, Jurisprudence, National Economy, Energy and Environmental Studies, International Law, Environmental and Energy policy, International relations/trade, Geopolitics
Published by: Ośrodek Studiów Wschodnich im. Marka Karpia
Keywords: Belarus; Astravyets; nuclear power plant; intergovernmental agreement; cooperation with Russia; investments; international safety standards;
Summary/Abstract: Belarus’s first nuclear power plant has been under construction in the city of Astravyets for a decade now. The project was able to start when Belarus signed an intergovernmental agreement with Russia in 2012, under which the Russian side agreed to finance the project almost fully and provide the technology. The nuclear power plant in Astravyets signals the first time that ground has been broken on a nuclear power project in Europe since the 1986 Chernobyl disaster. Although the Belarusian Nuclear Power Plant (Belarusian NPP), as the project is officially called, is being built just 200 km from the Polish border, it rarely appears in Polish or European news and a wider debate about its safety is yet to take place. Lithuania is the only country where the Astravyets project has stirred major controversy. The project is not only debated there – it has become a key issue in Lithuania’s relations with its allies in the European Union and NATO. Lithuania is concerned about the plant’s location, less than 50 km from Vilnius, while Lithuanian experts believe that the project’s execution does not comply with international safety standards. As a result of the efforts made by Vilnius, the Belarusian-Russian investment has now been noticed internationally.