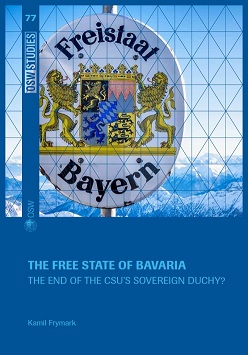 Author(s): Kamil Frymark
Contributor(s): Anna Kwiatkowska-Drożdż (Editor), Wojciech Stanisławski (Editor), Katarzyna Kazimierska (Editor), Małgorzata Zarębska (Editor), Anna Łabuszewska (Editor), Magdalena Klimowicz (Translator), Jim Todd (Translator)
Subject(s): Politics / Political Sciences, Politics, Social Sciences, Governance, Sociology, Government/Political systems, Sociology of Politics, Geopolitics
Published by: Ośrodek Studiów Wschodnich im. Marka Karpia
Keywords: Germany; Bavaria; Christian Social Union; German politics; Alternative für Deutschland; German government;
Summary/Abstract: The Christian Social Union (CSU) has ruled Bavaria continuously for sixty years. The CSU’s domination of the state’s political scene, together with its influence on federal policies through its partnership with the CDU in the Bundestag, has made the party one of the most effective groups in Europe. This was confirmed in the election to Bavaria’s Landtag in October 2018, which the CSU has won once again. At the same time, the party is being confronted by other conservative groupings, mainly Alternative für Deutschland (AfD), which has a similar profile to the CSU in several aspects. This, combined with the outflow of similarly sized groups of voters to the AfD and to the Greens, as well as to Freie Wähler, means the CSU is facing a new challenge that involves creating a comprehensive political agenda without losing the party’s conservative identity. The purpose of this report in to present the place the CSU occupies on the political map of Germany and the importance of this grouping for Bavaria. It discusses the changes happening both within the CSU and in Bavaria itself and the possible scenarios for the development of the party and of the state. To study these processes, the author has mainly used the methodology of observing political developments and analysing documents published by the German government, as well as Bavaria’s laws and documents compiled by the CSU. This has been complemented by interviews with German experts.