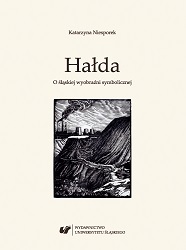 Author(s): Katarzyna Niesporek
Subject(s): Geography, Regional studies, Regional Geography
Published by: Wydawnictwo Uniwersytetu Śląskiego
Keywords: spoil heap; poetry; Upper Silesia; imagination; symbol;
Summary/Abstract: Instead of being an all-encompassing monograph, this book consists of essays and articles engaging a number of authors. It predominantly focuses on the poems which treat the image of a spoil heap, the most iconic representation of the black Silesia, as a literary symbol. The spoil heap turns out to be not only an irremovable element of the landscape, but also a trope raising both existential and ethical issues.The spoil heap, understood as the symbol of landscape, is a recurrent motif in the literary works of Silesian poets. This book focuses on the most representative poets, if not the most important ones for the Upper Silesian literature; however, it is not the intention of this book to engage in literary and historical debates that establish such a hierarchy among authors, but rather to elaborate on the topic which has been so far unnoticed in literary studies. In other words, this work aims to look at Silesia and its inhabitants locked in the industrial landscape by means of the spoil heap – its most iconic symbol – and to pose significant questions concerning existence and its value.The spoil heap is referred to by both eminent and less well known poets (and even amateurs). It is beyond the scope of this book to list all of them. Hence, the analysis focuses entirely on the first and second generations of Silesian poets: Emil Zegadłowicz (born 1888), Włodzimierz Żelechowski (born 1893), Wilhelm Szewczyk (born 1913), Bolesław Lubosz (born 1928), Tadeusz Kijonka (born 1936), and Stanisław Krawczyk (born 1938).Even though the poems stem from different historical and social contexts, the works discussed in this book are united by the similar images of the spoil heap (the only exception being the ones by Emil Zegadłowicz, who does not mention the spoil heap at all). The authors depict the spoil heaps as, among others, the “mountains of life” surprisingly blooming with nature, the places serving as shelters, bunkers, and even arsenals during wars and the Silesian Uprisings, the spaces of secret and intimate meetings; they are also the places of poverty, the reality of everyday toil and one’s salvation. Finally, the spoil heaps have been shown as wastelands, dumps of rubbish, piles of mine residue, or as hills polluting and intoxicating the surrounding areas.The chapters on the Silesian poets this book consists of are the critical readings of the eponymous image; still, each approach to this image construes its own distinctive perspective: “it reveals the visible, yet in a different – and previously unknown – way.” In these investigations, interpretation – as a method – is the key to unlock the poetic imagination, whereas literary and historical contexts pop out – one might say – by a mere chance, which, nevertheless, insightfully supports the practices of reading.