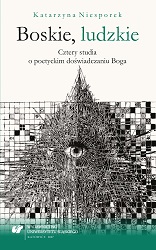 Author(s): Katarzyna Niesporek-Klanowska
Subject(s): Literary Texts, Studies of Literature, Polish Literature, Theory of Literature
Published by: Wydawnictwo Uniwersytetu Śląskiego
Keywords: Jerzy Liebert; Władysław Sebyła; Tadeusz Różewicz; Wilhelm Szewczyk; Divine; human; God; angel; church; passions; religiosity; metaphysical
Summary/Abstract: Divine, human. Four studies of the poetic experience of God is a book presentingdifferent ways of expression of an individual’s stance on “metaphysicality” in the lyric poetry of the interwar period and the first years of World War II. They mean, as Józef Czechowicz put it, “a confluence of thoughts and predispositions accompanied by emotions underlying an artist’s world view”. In the presented studies, this world view does not refer only to orthodox religiousness but first of all, it considers the “metaphysical system of the world’s interpretation”. Hence, the dominant experience is the quest for the Absolute and for what is transcendental and sacred of this world, which is marked and desecrated by war, anguish, solitude, disease and death. The opening study concerns Jerzy Liebert’s poetry. The author’s companions in his spiritual struggle are beings from the sphere of sacrum. Their doings are described especially in the two poems: Anioł Żalu and Anioł Pokoju, which are compared to the poems: Próby, Kuszenie, Jeździec and Boża noc devoted to the “internal experiences of man who took the road of atonement in his journey towards God”. The heavenly messengers perform a function of intermediaries, guides and teachers. Their presence proves the existenceof the Absolute and puts the lyrical subject in a state of ecstatic rapture. The study of Jerzy Liebert’s angelic poems, pointing to the presence of the celestial being in the juvenile poems of the author of Kołysanka jodłowa, further develops, so to speak, the deliberations on angels in his poetry found in Maria Szczepan-Wojnarska’s and Piotr Nowaczyński’s books.Part two discusses the autonomous images of the Absolute, emerging from Władysław Sebyła’s work permeated with despair and fear, of God present and absent, powerful and weak, holy and human. What the author of Pieśń szczurołapa has in common with Jerzy Liebert is not only the same generation, time of debut, Skamander fascinations and rebellions, but also the region they come from (let us remind that the first was born in Kłobuckin 1902 and the latter in nearby Częstochowa two years later). However, the subject of the author of Nokturny is definitely a homo metaphysicus whose road leads from hope to despair, yet, he does not deny the existence and presence of God. A continuation of deliberations on the lyric poetry of the interwar period is the study of Tadeusz Różewicz’s juvenilia. His early poems have a religious background. Between 1938 and 1939, the poet published seven poemsin the Sodality of Our Ladys’s magazine “Pod Znakiem Maryi”. Years later, he confessed that his poetic experience had originated from a metaphysical experience. Alongside religious lyrics he wrote a few other poems, including erotic ones. The article reflects on these literary beginnings of the later author of Niepokój. As is known, his religious orientation was weakened during the war, although later the poet oftentimes alluded to metaphysical questions. There is little literature on the subject, whereas it seems to be significant for the understanding of Tadeusz Różewicz’s literary development. The book closes with an attempt at an interpretation of the series of lyric poems Pasje strasburskie by a Silesian author Wilhelm Szewczyk. Only seven out of ten poems were officially published in the volume Posągi from 1945. The other three sonnets have been transcribed from an autograph andpublished by Marian Kisiel in “Śląsk” on the occasion of the 85th birthday of the author of Poemat górniczy. This collection of studies on the experience of “metaphysicality” in selected lyric poems from the interwar period and the first years of World War II reveals an image of the incessantly clashing divine and the human. The studies demonstrate an individual dimension of experiencing the revealed truths, which led some to the profession of faith and others to spiritual despair in an “empty church”, and still others to a more profound experience of existential anguish.