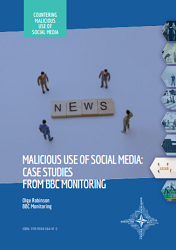 Author(s): Olga Robinson
Contributor(s): Anna Reynolds (Editor)
Subject(s): Social Sciences, Economy, Media studies, Communication studies, Sociology, Studies in violence and power, Social Informatics, ICT Information and Communications Technologies, Globalization
Published by: NATO Strategic Communications Centre of Excellence
Keywords: BBC Monitoring; international media; social media; media manipulation; disinformation;
Summary/Abstract: BBC Monitoring (BBCM) is a specialist unit within BBC News that tracks thousands of international media outlets, including hard-to-reach broadcast sources, to report news from and about the world’s media and social media. Set up at the outbreak of World War II with the primary purpose of informing the War Office about propaganda by Nazi-controlled media, BBCM has a long history of tackling disinformation and misleading reporting. Over the past 79 years, the service has translated, explained, and interpreted media messages, from the broadcast propaganda of the Cold War to the multi-platform campaigns of today. The rise of social networks and instant messaging platforms has ushered in a new and fast-changing era for open-source media monitoring. Today, BBCM still relies on its detailed knowledge of media sources and behavior along with linguistic, regional, and cultural expertise to navigate the increasingly complex and muddled information space. In addition, it uses a range of tools for social media analysis, and continues to explore ways of using evolving technology to improve its journalists’ ability to track multiple sources and spot media manipulation. BBCM this year launched a new dedicated disinformation team, whose primary purpose is to spot, collate, and investigate examples of misleading reporting and manipulation, drawing on BBCM’s overall monitoring of global media. This report shows some of the disinformation techniques and tactics that BBCM journalists have come across in their recent work, and outlines the approach adopted by BBCM to rise to the challenges of disinformation in the 21st century.