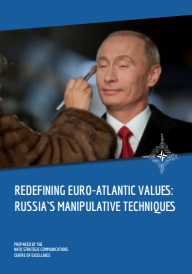 Author(s): Elīna Lange-Ionatamišvili
Contributor(s): Anna Reynolds (Editor)
Subject(s): Politics, Media studies, Geography, Regional studies, Communication studies, Government/Political systems, International relations/trade, Methodology and research technology, EU-Accession / EU-DEvelopment, Peace and Conflict Studies
Published by: NATO Strategic Communications Centre of Excellence
Keywords: Russia; Ukraine; Europe; EU; politics; manipulation; information; communication; media; values;
Summary/Abstract: Since November 2013, when the uprising of the Ukrainian nation set in motion a wide spectrum of events and political process, researchers and policy makers have been questioning the reasoning, consequences, and international implications of those political processes, as well as their impact on the future of the international political environment. This study, Redefining Euro-Atlantic Values: Russia`s Manipulative Techniques, is not one of the many investigations published in recent months focusing on Russian information warfare in Ukraine. It is not a study about them. This is a study about us, namely, the ‘transatlantic community’—a community we consider to be based on democratic values. This study seeks to answer an essential question: how can it be that countries, which enjoy leading positions in terms of prosperity, freedom, solidarity, innovation, economic competitiveness, and seemingly unlimited normative power based on the long-standing democratic traditions have neglected or ignored (intentionally and unintentionally) the manipulative redefinition of their core democratic values. By allowing our core democratic values to be deconstructed and reconstituted by values derived from an authoritarian regime makes Western society vulnerable to influence. Russia’s international ambitions are not based on conquering new territories, but on creating mental landscapes susceptible to political manipulation. Russia’s foreign policy goals with regard to the West are clear: ‘to weaken the West economically, to split it politically, and to establish Russia as the hegemonic power on the European continent’1 . Extensive material resources are unnecessary; individuals and societies that question themselves are decisive ‘weapons’ in the battle for influence. Transitioning out of the international relationships that dominated during the Cold War was an eye- and mind-opening exercise for both governments and societies. Most of the countries that left the Soviet bloc, including the Baltic States, joined those that are based on democratic values; however some keep their old values, fashionably redressed in a style called ‘sovereign democracy’.