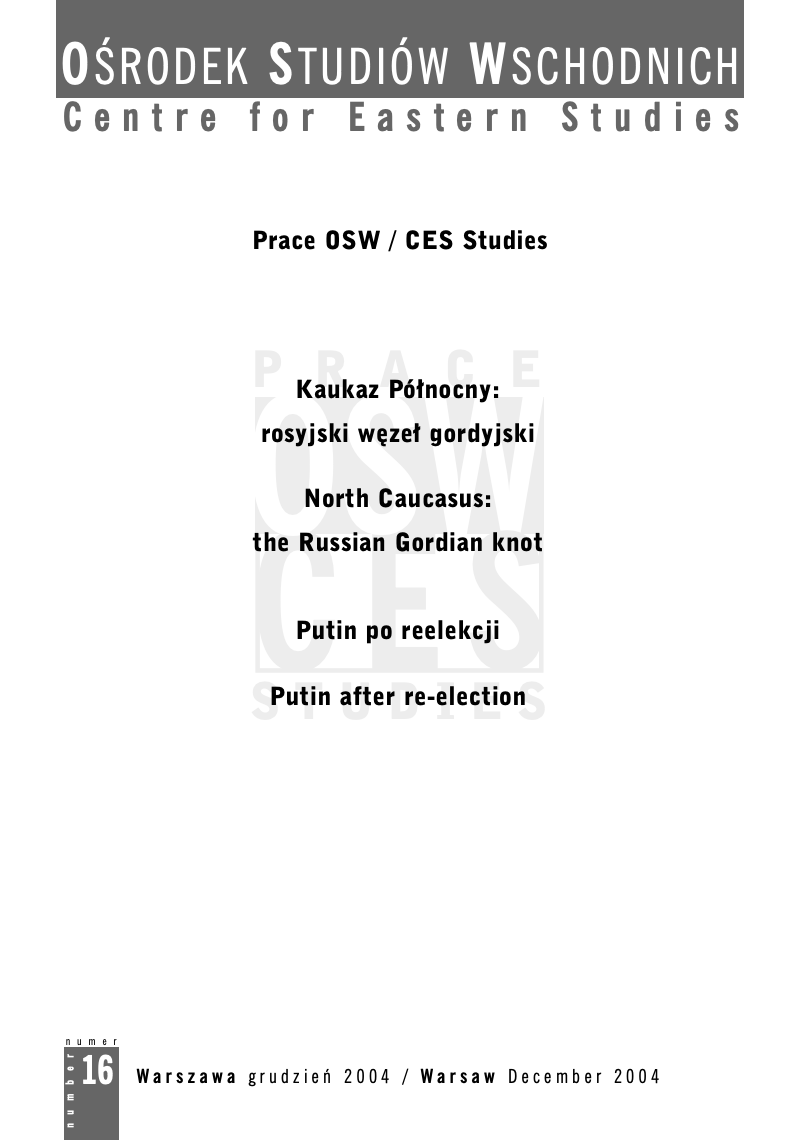 Author(s): Maciej Falkowski
Subject(s): Politics / Political Sciences, Politics, Geopolitics
Published by: Ośrodek Studiów Wschodnich im. Marka Karpia
Keywords: North Caucasus; Russia
Summary/Abstract: 1. North Caucasus is the most instable part of the Russian Federation: since the early 90's, there has been going on the military conflict in Chechnya, which is gradually spilling over into the other republics of the region, terrorism seems to have occupied its regular position in the political life of Caucasus, organized crime is flourishing, the tension persists there and military incidents and attacks are breaking out every now and again. During the recent year, the destabilization of the region, which affects many fields of Russian political and social life, has grown to an alarming size. 2. There are many reasons for the instability in the region; they stem from numerous political, religious and socioeconomic problems and conflicts. They all overlap, interweave and create a complex network. The most difficult problem is the war in Chechnya, lasting since the early 90's, which is spilling over the neighboring republics, takes increasingly more drastic shapes and poses a threat to the security and stability of the entire country. The conflict stimulates dangerous tendencies and processes all over Caucasus: it is one of the reasons for the intensifying anti-Russian sentiments in the local communities, and it accelerates their drifting towards radical Islam, etc. Moreover, the region is a scene of numerous ethnic conflicts (the conflicts in Dagestan, the western part of Caucasus, the Ingush- -Ossetian conflict), religious (mainly inside Islam) and conflicts between the indigenous Russian people and immigrants from Caucasus and Central Asia in Stavropol and Krasnodar Krais as well as acute socioeconomic problems (poverty, unemployment, overpopulation, growing crime). 3. Since the collapse of the USSR, the Kremlin has failed to frame a consistent and long-term concept for development of North Caucasus and its integration with the rest of Russia. The Russian authorities' policy towards Caucasus is limited to emergency actions, responding to crises instead of preventing them. It consists in abortive attempts to liquidate the effects of negative tendencies and events and not on counteracting the causes thereof. The authorities are still making the same mistakes, unwilling to recognize their obvious failures. The key elements of the policy include: preventing any interference of other countries and international organizations in the region, conducting the "antiterrorist operation", supporting the puppet regimes in particular republics, marginalisation of the opposition and the far-flung propaganda in the mass media, which shows a false picture of the reality. A great role in the Caucasian policy of the Kremlin is played by law enforcement structures, whose interests often collide with the interests of the Russian state. Such a policy does not lead to resolving problems and conflicts, on the contrary, it leads to deepening and escalation thereof. 4. The future of North Caucasus depends on either settlement or worsening of the existing problems; if they intensify, Caucasus will be plunging in chaos. The instability in the region is accompanied by further-reaching processes, i.e. gradual drifting apart of Caucasus from Russia, its derussification and increasingly faster Islamisation. Such tendencies, which in the prospect of several decades could end in a high degree of autonomy or even separation of the region from the Russian Federation, could be slowed down through working out of a comprehensive concept for development of the region. However, for the time being, the Kremlin has neither political will nor ability to develop and implement such a concept: the main reasons for that are the views of the Russian ruling elites and the general condition of the Russian state (the lack of sufficient financial means, lack of proper staff, resistance of the law enforcement structures, degeneration of the state structures, etc.). 5. North Caucasus is a region where many serious problems are concentrated. The future of Russia will depend on their resolution (the Chechen war, other ethnic and religious conflicts, rapid growth of non-Russian and Muslim population, decreasing number of ethnic Russians, etc.). So long as Moscow is unable to resolve them, Russia will be an unpredictable and instable country, in danger of terrorism and convulsed by internal conflicts. Unless the Kremlin copes with the issue of Caucasus, it will not be possible for Russia to enter on the path of democratic reform, to make the attempt to create a modern country, open to global cooperation. Caucasus is today a source of disintegration of the Russian state, of its structures and society; unless this is held back, in the longer term, it may become a source of its collapse. Russia's position in the post-Soviet area and, above all, in South Caucasus will also depend on the way the situation in North Caucasus develops.