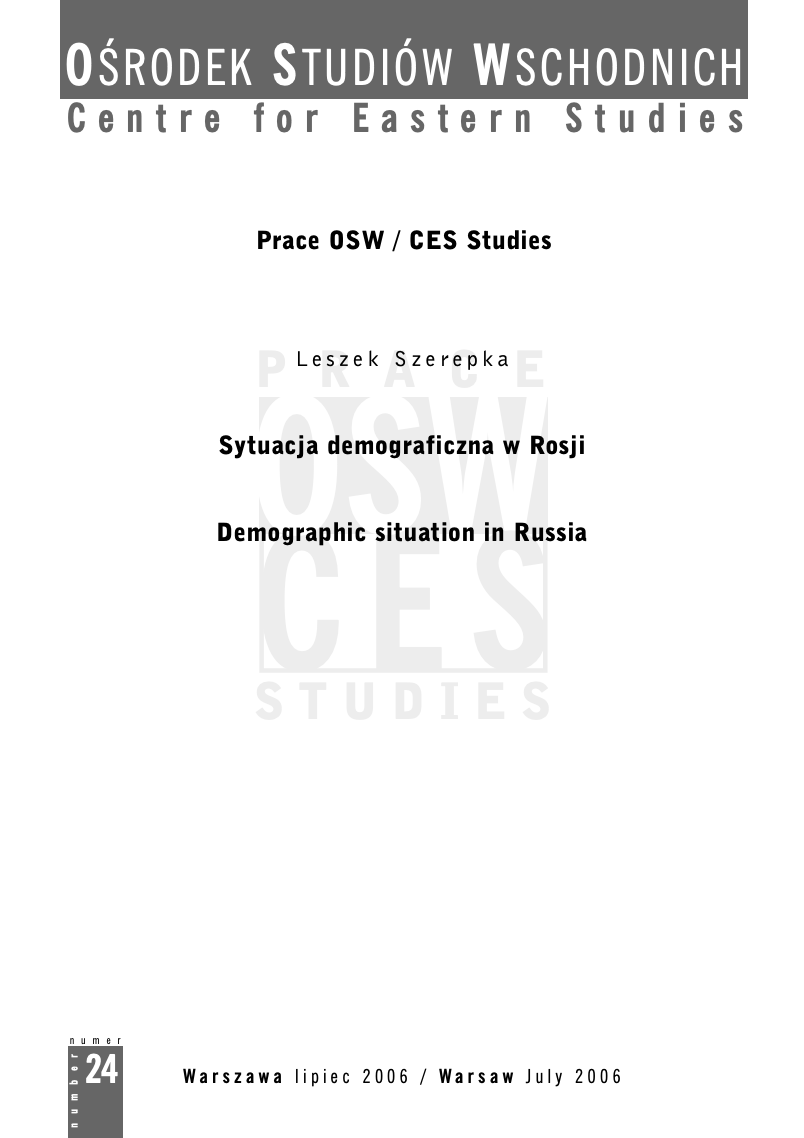 Author(s): Leszek Szerepka
Subject(s): Politics / Political Sciences, Politics, Geopolitics
Published by: Ośrodek Studiów Wschodnich im. Marka Karpia
Keywords: demography; Russia
Summary/Abstract: Throughout the history of Russia, periods of deep chaos have been accompanied by demographic crises. This was the case during the Time of Troubles, or Smutnoye Vremya, in the seventeenth century, and during the period of wars and revolutions in the early twentieth century, which brought the Bolsheviks to power. Similarly, the break-up of the USSR also coincided with a demographic crisis. However, while the previous crises had been caused by factors such as war, famine, epidemics or repressive policies, and were followed by periods of rapid population growth once these factors had ceased to operate, the current crisis is systemic and structural. To a large extent, it has been occasioned by cultural factors such as changing family models and the roles of women in today's society. In Russia, the effect of these factors on population increase is exacerbated by excessive alcohol consumption, an culture of inadequate working conditions which leads to many accidents at work, and healthcare deficiencies (only c. 3% of the GDP is spent on healthcare annually). In 2005, the Russian Academy of Sciences concluded a research programme entitled 'The demographic modernization of Russia, 1900-2000'. In the report it indicated that the Russian state had lost c. 140 million people in the twentieth century as a result of bad policies. This means that the present population of Russia would be larger by this number if the development of the state in the previous century had followed similar patterns to that of European states, and if human life had been respected in Russia as much as it was in Western Europe. According to Russian researchers, many current demographic problems in Russia stem from occurrences in the distant past. Development models are difficult to correct within a short timespan. All projections concerning Russia's demographic development predict that the country's population will continue to shrink until at least the middle of the twentyfirst century. The projections only differ as to the speed and nature of the population decrease. When juxtaposed with the dynamic GDP growth and the government's ambition to reinforce Russia's international position, the demographic problems are a dissonance. The Russian political elite is concerned that if the negative demographic trends prevail, this may eventually stop the country's economic development. It is also worried that with its current population density, Russia will not be able to defend its vast territory and use it adequately. It is frequently emphasised that as a world power, the USSR had always remained among the top three most populous countries in the world after China and India. In 2000, the Russian Federation, as the legal successor of the USSR, dropped to sixth in this ranking, and in the mid-21st century it will struggle to remain in the top twenty. According to Russian analysts, a country with such a small population potential, disproportionate to its territory, will face difficulties preserving its status as a world power, and consequently in defending its international interests. The fact that Russia is a multinational state further complicates the situation. The country used to be dominated by ethnic Russians, but their percentage is shrinking systematically. In the future, this may affect both the country's cohesion and its prevailing cultural models. The Russian authorities are aware of these threats; President Vladimir Putin mentions them regularly in his addresses to the nation. In his most recent speech, delivered on 10 May 2006, Putin said that the demographic crisis was the most important issue in Russia's internal policy. Demographic problems have been discussed by the parliament, the government and the Russian Federation Security Council. A document entitled 'A concept for the Russian Federation's demographic development to 2015' has been adopted. The media cover the issue, frequently taking an alarming tone. However, in the policies implemented by the Russian authorities, improving the demographic situation has not been a genuine priority. The measures proposed have frequently been provisional, and have ultimately had little effect on demographic trends. Figures now available fully corroborate the pessimistic projections concerning Russia's demographic development which researchers had presented at the onset of the previous decade.