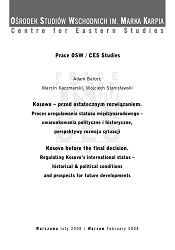 Author(s): Marcin Kaczmarski, Wojciech Stanisławski, Adam Balcer
Subject(s): Politics, Geopolitics
Published by: Ośrodek Studiów Wschodnich im. Marka Karpia
Summary/Abstract: The question of Kosovo's status is currently one of the most important issues in international politics. Since 1999, Kosovo has been an international protectorate which was created in the aftermath of the NATO intervention to stop the brutal pacification of the Albanian insurgency by Serb forces. The province has since de facto become independent of Serbia. Resolution 1244 of the UN Security Council, which established the protectorate, does not preclude any possible outcome as regards its status. Aware that after the crimes of 1999, any attempt to re-integrate Kosovo into Serbia would lead to a massive Albanian uprising, the West has decided that the best solution would be to award Kosovo internationally supervised independence, while at the same time granting very wide autonomy to the Kosovo Serbs. Serbia and Russia rejected the solution proposed by the West, and so Kosovo became an arena of international rivalry for influence in the Western Balkans as well as another element of rivalry, transcending the regional dimension, between Russia and the West. Russia has been using the Kosovo case to build a new model of its relations with the United States and the EU. Since there is a group of countries sceptical about, or even opposed to, Kosovo's independence within the EU, the Kosovo settlement will be a test of the EU's ability to speak with one voice with regard to its external policy. Kosovo is also important because of the possible negative consequences of its proclamation of independence as well as the recognition of that independence by the West. Such consequences will certainly include a serious souring of the West's relations with Russia and Serbia. Belgrade has announced that it will impose a transport and economic blockade on Kosovo. Combined with possible Serb demonstrations in the province, such a policy may lead to an outbreak of anti-Serb Albanian riots and to an activation of Albanian guerrilla militants in southern Serbia. Kosovo's independence will strengthen centrifugal tendencies in the Serb-populated regions of Bosnia and, to a lesser extent, Montenegro, engendering serious problems for these countries' integration with the EU. The purpose of this paper is to present the ethnic, historical, social and economic context of the Kosovo crisis, and to show its regional and global dimensions.