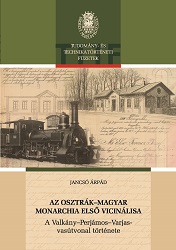 Az Osztrák–Magyar Monarchia első vicinálisa. A Valkány–Perjámos–Varjas-vasútvonal története
The First Vicinal Railroad in the Austro-Hungarian Monarchy. The History of Construction the Valcani/Valkány-Periam/Perjámos Railway

Author(s): Árpád Jancsó
Subject(s): History, Local History / Microhistory
ISSN: 2068-3103
Published by: Erdélyi Múzeum-Egyesület
Keywords: technical history; local history; Transylvania; railway;
Summary/Abstract: On the current territory of Romania there is a secondary railway that links Timişoara/Temesvár to the border village of Valcani/Valkány. Few people know that this rail- way was built in three phases by two different companies. The railway Valcani/Valkány-Periam/Perjámos was put in service in 1870. It was constructed by the Imperial Royal Privileged Austrian State Railway Company (StEG) with the aim of connecting the grain-producing villages from north-western Banat/Bánát to the main rail line Vienna-Pest-Szeged-Timișoara/Temesvár-Baziaș/Báziás. To that date, only the very expensive main lines were built (with a „luxury budget”). The need to collect and direct the traffic towards the main railway lines was a necessity of the times. The low traffic could not sustain the costs for building railways at the main lines standards. After long debates, the technicians and funders came to the conclusion that the main rail line needs to be complemented by secondary networks (named local or vicinal lines). To expedite their construction and to save costs, it was decided that a series of compulso-ry technical and safety standards were to be given up. In horizontal plan the minimum radius of the curves were reduced, it was allowed a thinner, weaker infrastructure, built from materials with lower strength, mostly local ones, sleepers from softer wood, superstructure with lighter rails and less costly engineering works. Special projects were designed for the service buildings. By chance, the railway Valcani/Valkány-Periam/Perjámos was the first of this kind in the entire Austrian-Hungarian Monarchy.The experience gained in construction and exploitation of this railway was later used in building the subsequent local rail networks and the conclusions were taken in to account when a law for local railways was conceived. The StEG wanted to extend the line Valcani/Valkány-Periam/Perjámos and to link it to the Arad/Arad-Timişoara/Temesvár line, but were only able to finalize a short * romanian/hungarian name extension until Variaş/Varjas only in 1888. The connection with Timişoara/Temesvár was finalized only in 1908 by another railway company.After the end of the First World War and the establishing of the new borders, the railway station Valcani/Valkány with a short rail section became part of the Kingdom of Serbs, Croats and Slovenes and the rest of the line became part of Kingdom of Romania.The book analyses in detail both economic aspects regarding local railway lines and their technical details. Based on the author’s research, in various archives, the book thoroughly documents both the administrative steps undertaken and the pure technical details of the railway line. A separate chapter is focused on the extension of the railway to Variaş/Varjas, with a short presentation of its connection to the Timişoara/Temesvár line. There are separately presented the infrastructure, superstructure, engineering works and service buildings of the railway. Traction is also presented in a separate chapter, where the reader has the opportunity to be acquainted to the locomotives that to wed the trains over the decades and will gain familiarity with their grading and notations.Aspects of the railway in the post-Trianon period and socialist age are separately presented.Thanks to the in-depth archival research, the author was able to find a large number of reproductions after the original projects and other inedited documents, which support and enhance the author’s conclusions. These documents add a special documentary value to the author’s inquiry.