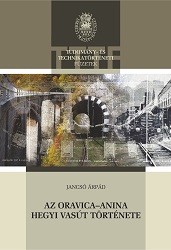 Author(s): Árpád Jancsó
Subject(s): History, Essay|Book Review |Scientific Life, Local History / Microhistory, Scientific Life
ISSN: 2068-3103
Published by: Erdélyi Múzeum-Egyesület
Keywords: technical history; local history; Transylvania; railway; Oravița;
Summary/Abstract: The book presents the history of the mountain railway between Oraviţa (hung.: Oravicabánya) and Anina (hung.: Anina).At the beginning of the XIXth century, the interest towards the exploitation of coal deposits in the Anina coal field grew. But the main impediment was the lack of a transportation route. The only available solution was the construction of a railroad that linked Anina to Oraviţa. From Oraviţa to Baziaş (hung.: Báziás), the port on the Danube a railroad was just opened in 1856, the first railroad on the territory of today’s Romania.The difficult terrain forced the designers of the railroad to implement a large array of engineering works: embankments, excavations, 14 tunnels, 10 viaducts, bridges, culverts, and a minimum radius of the curves measuring 114 m. The railroad’s characteristics required the designing of special locomotives, whose planning and execution sparked the interest of the field’s specialists. For the circulation on this railway, a special propelling system was drawn up.The railroad between Oraviţa and Anina was among the first mountain railroads in Europe, the first of its kind in what was then Hungary and the first mountain railroad on today’s territory of Romania. Due to its technical specifications it is often compared with the mountain railroad in Semmering, Austria.The volume discusses in detail the conditions of its design, the planning, the construction, its administration and service from its commissioning to our days. Because of its curves’ small radiuses and large terrain declivities, up to 20‰, special locomotives were designed and manufactured. A whole chapter is dedicated to their analysis. The author also conducted an extensive research in archives and re-traced many times the route of this railway.The book is richly illustrated with unpublished reproductions of documents and drawings of the initial plans, with images and old pictures, to which the author added its own photographs.This document-book is the most extensive monograph on the mountain railroad Oraviţa-Anina.