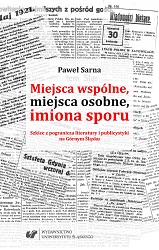 Author(s): Paweł Sarna
Subject(s): Politics / Political Sciences, Media studies, Sociology, Politics and society, Culture and social structure , Rhetoric
Published by: Wydawnictwo Uniwersytetu Śląskiego
Keywords: social and cultural press; Upper Silesia; rhetoric
Summary/Abstract: “Common places, separate places, names of the dispute” – title of this dissertation points to the major relationships between parts of this collection as well as its individual texts. The authors presented in this book are connected with Upper Silesia in various ways. The author is interested in both, similarities and differences in their worldview, their creative attitudes and writing strategies. The region itself was a borderland, a place of coexistence, but also a place where cultures, truths and forces clashed. It is hard to believe that its literary works were based on anything else but dichotomies. Some of these authors are native Silesians, others came to Upper Silesia and settled here. How much their birthplace determines their perception of this place? – it is one of questions that constantly arise on the pages of this book. The first part includes articles, miniatures and critical sketches on the poetry of authors representing different generations – Wilhelm Szewczyk, Jan Pierzchała, Stanisław Krawczyk, Andrzej Szuba, Tadeusz Sławek and Jerzy Suchanek. It starts with a rhetorical analysis of a poem by Wilhelm Szewczyk „Pogrzeb Korfantego” [„The Funeral of Korfanty”]. The elegy from 1939 is marked by a catastrophic note regarding the future fate of the Silesian. Poetry – written for three decades from the thirties to the fifties – constituted an important part of literary works by Wilhelm Szewczyk. Jan Pierzchała was primarily a prose writer, and as a poet he was the author of only one collection, „Poems” (1948). He observed Silesia with eyes of an outsider. Born in Jaworzno, a place he described as being “on the border of Cracow and Silesia” he depicted a drama of a single man with his life embedded in the collective fate of a community who endures all the hardships affecting this community. Stanisław Krawczyk is a poet suspended between his two homelands – Zaglebie and Upper Silesia. The next three authors are closer to a general rather than a particular idea – Andrzej Szuba, Tadeusz Slawek, and Jerzy Suchanek. All three seem to combine the search for the formula of spirituality in the postmodern world. The next part focus on journalism, and some characters present in the previous section, Wilhelm Szewczyk and Stanisław Krawczyk, appear in different writer roles. In this part I also introduced Alexander Viktor Widery, a journalist, folklorist and poet. It is worth mentioning that his interest in folklore, especially this of Śląsk Cieszyński [Cieszyn Silesia] resulted in numerous radio programs and books. The last part of this work contains articles devoted to press in Upper Silesia. The first paper analyzed interwar press titles: “Polonia” and “Western Poland”. Progovernment «Western Poland» and «Polonia» issued by Wojciech Korfanty became a tribune of political struggle. Press control by the state authorities and repressive activities against the opposition press, violations of social norms and freedom of speech are an important context here. Another magazine presented is called «Odra» – published in Katowice in the period of the People’s Republic of Poland, it resembles 20th – century journals, in particular those of regional character. “Kuźnica” and “Polonia” belonged to the direct tradition of “Odra”. In the last study, a rhetorical strategy adopted by the editorial team of the “Silesian Literary Quarterly” was examined. The script was published in the fifties and it served as an organ of the Katowice branch of the Polish Writer’s Union, but it also promoted authors from Opole. The adoption of a rhetorical perspective, sometimes very pronounced, as it appears in the titles of individual articles and sketches, sometimes less conspicuous, allows one to focus on the aspect of persuasiveness, which in many cases may be unobtrusive but important for reading not only journalistic texts, but also literary works.