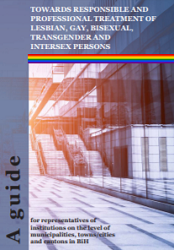 Author(s): Dajana Cvjetković, Vladana Vasić
Contributor(s): Saša Gavrić (Editor), Emina Bošnjak (Editor)
Subject(s): Gender Studies, Education, Law, Constitution, Jurisprudence, Geography, Regional studies, Government/Political systems, Evaluation research, Health and medicine and law, Family and social welfare
Published by: Sarajevo Open Centre
Keywords: BiH; cantons; municipalities; towns/cities; institutions representatives; gender; LGBTI; lesbian; gay; bisexual; transgender; intersex; guide; integration; evaluation; health care; social work; education; prosecutors office; authorities;
Summary/Abstract: Dear professionals, If you have never had a professional encounter with lesbian, gay, bisexual, transgender or intersex (LGBTI) persons, then this guide is for you. Think about it! If, in your entire career, you have never dealt with an LGBTI person, could it be that you just failed to recognise one? Consider this example. According to census results from 2013, about 80,000 citizens of the Federation of BiH do not belong to any of the three constituent peoples. They have professed to be members of national minorities, Bosnians and/or Herzegovinians, members of other ethnic identities, or simply refused to profess any ethnic affiliation. With this in mind, have you ever had a professional encounter with a Roma person, Jews, Albanians or Montenegrins? Or with people who are Catholics? Around 17,000 people in Sarajevo Canton stated they were Catholics during the census. Surely, you know members of these groups and communities. So how come you do not know any LGBTI persons, or know very few of them, when LGBTI people make up anywhere from 3 to 12 percent of the population in countries around the world. In Sarajevo Canton, 10 percent of the population amounts to more than 40,000 people – is it really possible that you have never had a single LGBTI person ask for your services? It is possible. It is possible in a conservative, close-minded society that openly denounces different sexual orientations, gender identities or sexual characteristics and expertly sweeps domestic violence under the carpet in the name of honour and good reputation among neighbours and family members. It is this kind of society that continues to deny the existence of LGBTI persons. Look around you in public transportation. You will perhaps see around 20 people. According to census results, 16 of them are probably Bosniaks, one person is a Croat or a Serb, while one to two people do not profess any ethnic affiliation. You know at least one person belonging to each of these categories, and yet you will completely disregard the fact that one to two people are members of the LGBTI community. Of course, none of this matters when you use public transportation, nor should it matter. However, there are occasions, especially when it comes to the work of institutions – municipalities, cities/towns and cantons,1 when sexual orientation, gender identity and sexual characteristics become very important. When developing public policies, programs, strategies, action plans, or providing services and carrying out their duties, these institutions should keep in mind that a significant number of people in our society are LGBTI persons who have specific needs and problems. Dear professionals, integrating LGBTI persons in all spheres of public life and recognising their needs is very important if these citizens are to fully enjoy their indispensible, fundamental human rights. Their existence in our society should not be ignored, concealed behind the veil of tradition, hypocritical values and conservative attitudes that negate the needs of these persons. Let us change Bosnia and Herzegovina together. Let us work in our municipalities, towns/cities and cantons to ensure equality of all citizens. We hope that this guide, that was created within the project establishing institutional network for LGBTI persons in Canton Sarajevo, implemented by Sarajevo Open Centre and supported by the USAID’s Marginalized Populations Support Activity in Bosnia and Herzegovina, will contribute to this aim.