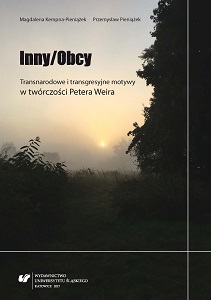 Author(s): Magdalena Kempna-Pieniążek, Przemysław Pieniążek
Subject(s): Fine Arts / Performing Arts, Film / Cinema / Cinematography, Sociology of Art
Published by: Wydawnictwo Uniwersytetu Śląskiego
Keywords: the other; alien; Peter Weir
Summary/Abstract: The book traces a change in the perception of the work of Peter Weir that has been under way in recent years, marked by a shift from interpretations focusing on spiritual themes to approaches emphasising the situation of the author immersed in the context of “Global Hollywood.” It also presents the most important aspects of wanderings undertaken by Weir’s protagonists, who search for a deeper dimension of existence that could help them define their identity and alliances in the world where “everything begins and ends at exactly the right time and place.” It expresses the conviction that the origins of both motives – transgressive and transnational – may be found in the dichotomy of the Other / Alien, conspicuously present in Weir’s films. For this reason, while focusing on the figure of the outsider, the book draws attention to the nature of transgressions that are taking place in Weir’s works. On the one hand, there is confrontation with whatever is mysterious. Exploration of different states of consciousness leads through the world of dreams and myths – a path that Weir’s protagonists travel to face their own weaknesses and limitations imposed by the oppressive system of culture. On the other hand, Weir’s films never stop mediating between the points of view of national and trans-national identity, between the genre cinema and the artistic cinema, and between creativity and convention, thereby consolidating the unique position of the film director as an Alien, both in Hollywood and in Australian cinema. The dynamics of these tensions have determined the character and the form of this book. Peter Weir’s works are not discussed here in a strictly chronological order, a more important criterion being the evolution of selected story threads and their related contexts which define the unique element in his work. Chapter One is concerned with the two most famous Australian films by Weir: Picnic at Hanging Rock (1975) and The Last Wave (1977), which established the range of themes he often returned to in later works. Next chapter offers interpretations of Gallipoli (1981) and The Year of Living Dangerously (1982). If the former is perceived as a realisation of the idea of Australian national cinema, the latter marks Weir’s accession to mainstream world cinema. Chapter Three is devoted to his Hollywood films. The analysis of Witness (1985), The Mosquito Coast (1986), and Fearless (1994) draws attention to the point of view of an Alien who observes America and American culture from a certain distance. This theme is then continued in Chapter Four, which focuses on the figure of the outsider – a character typical of Weir’s films, who can be seen in statu nascendi in Dead Poets Society (1989) and The Truman Show (1989). Finally, Chapter Five brings together analyses of Green Card (1990), Master and Commander: The Far Side of the World (2003), and The Way Back (2010), in which the transnational motives receive more prominence than in other films by Weir.The interpretations offered in this volume provide an argument for the claim that the work of Peter Weir is a fruit of the genre cinema and the artistic cinema coming together, as well as of the interaction between Australian cinema and Hollywood (and, in the background, European cinema). In the light of most recent research, it appears as a transnational phenomenon, a result of a combination of themes borrowed from various systems, not only cinematographic but also cultural.