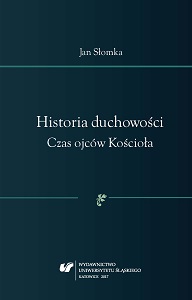 Author(s): Jan Słomka
Subject(s): Christian Theology and Religion, Theology and Religion, History of Religion
Published by: Wydawnictwo Uniwersytetu Śląskiego
Keywords: Christian antiquity; spirituality; monasticism; virginity; Church Fathers
Summary/Abstract: History of Spirituality attempts to capture the basic elements constituting the spiritual life of Christians in the initial five centuries of the Church’s existence. Since Christianity was born at the intersection of two worlds, Jewish and Greek-Roman, it seems indispensable to first briefly characterize the spiritual life of the said two cultural areas. This very topic is the subject of Chapter One. The subsequent chapter, in turn, discusses foundations of Christians’ spiritual life: baptism, which defines the Christian identity, the Holy Eucharist, the place occupied by the Holy Bible in the life of Christians, as well as prayer and fasting. The chapter which follows outlines the two spiritual traditions developed in the early days of the Church. First of them was for the most part eschatologically-oriented, praising martyrdom, and treating what is earthly and worldly as a mere transition period unworthy of our undivided attention. The second tradition aims to edify human spirituality based on the promise of resurrection. It likewise sees the readiness for martyrdom as Christianresponsibility, but at the same time underscores achieving perfection here on Earth. Besides, this tradition draws upon the Greek philosophy and values the state structures, thereby indicating that a Christian, exactly by virtue of adhering to his faith, is supposed to be a good citizen. Among the representatives of the foregoing tradition the book enumerates and particularly discusses Clement of Alexandria and Saint Ambrose of Milan. What is specific to Christian spirituality are the ideals of virginity and celibacy, the spiritual bases of which and the way it is enrooted in Christian life, are discussed in the subsequent chapter. Next, there are presented two spiritual doctrines of the Church Fathers who had the greatest impact on the forming of Christian spirituality, namely the ones of Origen and Augustin. From the beginnings of the fourth century onwards, the Christian spirituality becomes dominated by monasticism. Initially, it was an individual version thereof, the hermitic monasticism. Thus,in order to comprehensively discuss monastic spirituality, one has to begin with indicating the most important, specific features of anchorites’ spirituality. The spirituality of communal (coenobitic) monasticism is best described by its rules. Therefore, four representativemonastic rules are discussed, arranged by two main lines: the first including Pachomian and Benedictine monastic rules, and the second the Rule of St Basil (Basilian) and the Augustinian rule. Each of the foregoing rules has its own, clearly distinguished spiritualcharacteristics. The book’s final chapter presents two of the many erroneous spiritual paths that can be found in the early ages of Christianity: Pelagianism and Manichaeism. They were selected as warnings, for the contemporary world abounds in spiritual “offers” which arequite similar.