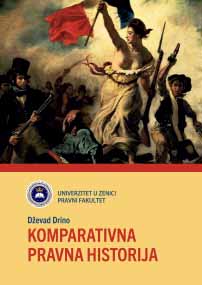 Author(s): Dževad Drino
Subject(s): Law, Constitution, Jurisprudence, History of Law, Comparative history
Published by: Pravni fakultet - Univerzitet u Zenici
Keywords: antiquity; society; state; history; law; revolution; Middle Ages;
Summary/Abstract: Comparative Legal History is a textbook on general history of state and law for the students of the Faculty of Law at the University of Zenica. It covers prehistory and the development of states and law in the Euro-Mediterranean region in the classical period, antiquity, Middle Ages, until modern age. It also covers the legal thought of the Far East (India, China, Japan) and Central East (Egypt, Babylon, the states of the Hittites and Jews), as well as Ancient Greece, medieval Germanic countries, Byzantine, Russia, England, Arabic and Ottoman Empires, including the religious legal systems of Sharia and Canon law. In the modern period, it analyses the laws existing in cities, the origin of contemporary European states, the foundation of the United States of America, legal consequences of France’s bourgeois revolution and the origin and development of socialist states and laws. The textbook contains a list of recommended literature (133 works) and index of names and geographic places. It is recommended to students of law, history, political sciences, and international relations as a useful resource to master the basic terms of historical development of countries and legal systems. It was written in Bosnian (Latin) language on 257 pages in total.