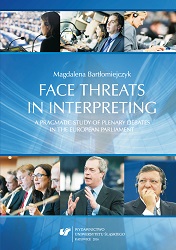 Author(s): Magdalena Bartłomiejczyk
Subject(s): Politics / Political Sciences, Politics, Language studies, Language and Literature Studies, Law, Constitution, Jurisprudence, Political Theory, Political Sciences, Public Administration, Philosophy of Law, Sociology of Law
Published by: Wydawnictwo Uniwersytetu Śląskiego
Keywords: Simultaneous translation; Strategies of the interpreter; rudeness; face, European parliament
Summary/Abstract: This monograph focuses on pragmatic aspects of simultaneous interpreting, and istherefore intended both for translation scholars and for linguists interested in interlingual transfer of pragmatic meaning. Efforts have been made to avoid dense, strictly scientific language and the use of unexplained specialist terminology in the hope that the book might also appeal to practicing interpreters and interpreter trainees, although it should be noted that its character is descriptive rather than prescriptive. The main problem under discussion is how simultaneous interpreters handle face-threatening acts and impoliteness directed by politicians at their opponents, and the authentic material under analysis comes from plenary debates of the European Parliament, which are routinely interpreted into all the official languages of the European Union. Chapters 1–4 are meant to set the scene. Chapter 1 presents the European Union as a multilingual institution, with a special focus on its translation and interpreting services. Chapter 2 zooms in on the latter, considering such features of plenary debates of the European Parliament that have direct consequences for interpreting, and also including an overview of existing research on interpreting for the needs of various EU bodies. Chapter 3 provides the pragmatic background to the study, shedding light especially on the crucial notions of “face,” “facework,” “face-threatening acts” and “impoliteness,” while Chapter 4 reviews existing research on facework performed by interpreters in various settings and interpreting modes.The author’s empirical contribution is presented in Chapter 5, which scrutinizes Polish interpretations of British Eurosceptics’ plenary speeches, in particular ones that fiercely attack and possibly offend the speakers’ political opponents. Five speeches undergo detailed discourse analysis covering all identifiable aspects of facework as performed by the original speaker and the interpreter, whereas a considerably larger corpus of source texts and the corresponding interpretations is analysed both qualitatively and quantitatively in terms of personal reference and impoliteness. The interpretations are searched, first and foremost, for signs of interpreting strategies at play during transfer of face-threatening input. Many of these strategies result in mitigation of the originally intended impoliteness. Chapter 6 develops this topic, endeavouring to find multifarious explanations of the pronounced trend towards mitigation by the interpreter within the wide framework of modern translation studies. Both this chapter and the final conclusions devote much attention to avenues for future research that would offer some possibilities of triangulating and complementing the results of thepresent study.