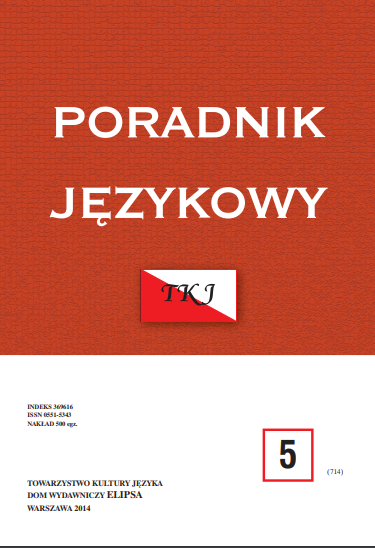 Summary/Abstract: In Polish, all nouns have grammatical gender; however, many traditionally “male” professions lack feminine names. For women employed in these professions masculine names are used. The word żołnierka ‘female soldier’ is present in contemporary dictionaries of the Polish language and also on the Internet, but many language users object to it. In order to check preference for masculine or feminine nouns referring to women in the military among young Poles I administered a short translation test to 38 trainee translators (students of English Philology). The word soldier, which appeared repeatedly in the source text, obviously referred to an individual woman. Żołnierka was only used by three participants. The composite feminine form pani żołnierz proved to be more popular (seven participants chose it at least once), yet the great majority of the translators (almost 87%) used the masculine generic noun żołnierz. In spite of their preference for the masculine noun, most participants were not able to use it correctly, in accordance with the relevant rules of the Polish grammar and with the situational context. The fact that so many participants chose masculine forms although in this case feminine ones were much easier to use suggests that new feminine forms proposed for some professions and positions in the name of the fight against linguistic sexism do not stand a big chance of being generally accepted.