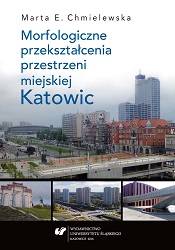 Author(s): Marta Chmielewska
Subject(s): Human Geography, Rural and urban sociology
Published by: Wydawnictwo Uniwersytetu Śląskiego
Keywords: Katowice; Urban Space; City morphology
Summary/Abstract: The monograph is situated within the scope of the Conzenian urban morphology and concerns the transformation of urban space in terms of morphology, in conjunction withchanges within its functional structure. The considerations are based on the example of Katowice—a city of a short but turbulent history, the space of which was influenced by numerous variable and diverse factors, and which has been recently transforming into a modern city—post-industrial and post-socialist. The main objective of the study is to demonstrate the evolution of the urban space of Katowice, and in particular, to answer the questions: how has the today’s morphological character of Katowice been formed, and in which direction will it be transforming? To accomplish the objective, a multi-step morphological analysis of the space of the city has been carried out, in accordance with the guidelines of Conzen’s methods with the employment of GIS tools. Firstly, the reconstruction of the formation of the space of Katowice, which was indispensable for further research, was undertaken. Genetic factors conditioning the course of the evolution of the city, as well as the stages of its morphological and spatial development were determined, and settlement units located within its boundaries were identified and arranged stratigraphically. 70 historical settlements were identified—diverse in terms of the time of their formation, their origin and incorporation in the borders of Katowice. Subsequently, the morphological structure of Katowice was characterised. The city was described in terms of its morphogenesis, physiognomy and layout. These three elements were employed as criteria to determine 48 classes of structural units of the study area and 178 units representing 19 of these classes. These units are arranged in a mosaic and non-uniformly fill the space of individual districts. Therefore, Katowice has a highly complex morphological structure.In the following stage of the work, the evolution of the urban space of Katowice, which has been occurring through the morphological and functional transformation, was examined. These transformations were analysed both in time and in space, with attention focused on their causes, directions and intensity. As a result, the phenomenon of morphological and functional succession was observed in the space of Katowice. Further research led to identification of the stages and types of this phenomenon. The morphological and functional evolution of Katowice, over its entire area, was characterised by isomorphism. The most important reason for the occurrence of the evolution was industrialisation, while the other reasons were complementary or secondary, or referred only to a small part of the city. The main directions of the transformations consisted in locating and developing industrial plants, and spreading of the residential area. Currently, emphasis on the elimination of the industrial plants and the development of services has been placed, however many new residential projects have been carried out.The morphological and functional transformations in the urban space have been resulting in replacing the existing morphological forms with new ones, and in changes of the functions performed by this space. Taking into consideration the number of transformations of the space in Katowice, three types of morphological and functional succession were distinguished, and subsequently these types were divided in view of the direction of the transformations into subtypes (32). The surface of the areas that corresponds to the individual types is inversely proportional to the complexity of the transformations characteristic of these types—the areas in which the succession has not yet been revealed are predominant, whereas the smallest surface is occupied by the areas that have undergone a three-phase succession. In addition, it may be observed that the succession took place predominantly in the areas in the northern part of the city, in the latitudinal belt.In the last part of the monograph, the trends in the transformations emerging currently in the morphology of Katowice (after 1989) were focused on. They are the result of the interaction of two groups of factors—the consequences of the political transformation, and the activities and plans of municipal authorities and social initiatives. The greatest impact has been exerted by the revitalization of both degraded post-industrial areas and urban areas, however the intensity and direction of the transformations of these two types of areas are different. The revitalisation projects additionally vary in terms of the impact on the morphology and function of the space. The most intensive changes occur in the central part of Katowice and are related to the aspirations towards transforming the centre of Katowice into a modern service and culture centre, the origin of the metropolis of Upper Silesia. These transformations are accompanied by the development of other parts of the city, oriented towards increasing its importance as a regional and national centre.