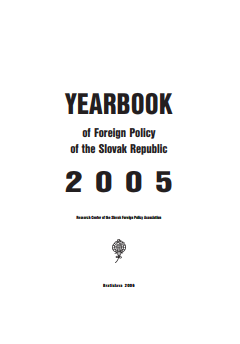 Contributor(s): Peter Brezáni (Editor), Martin Chovančík (Translator), Lucia Klapáčová (Translator), Katarína Žáková (Translator)
Subject(s): Politics, Geography, Regional studies, Supranational / Global Economy, Energy and Environmental Studies, Public Administration, Economic policy, Government/Political systems, International relations/trade, Security and defense, Developing nations, Evaluation research, EU-Accession / EU-DEvelopment
Published by: Research Center of the Slovak Foreign Policy Association (RC SFPA)
Keywords: Slovakia; 2005; foreign policy; EU; NATO; UN; security council; security; defense; economy; energy; Russia; Ukraine; Western Balkans; ODA; SlovakAid; armed forces; peace missions; Visegrad; V4; embassy; consulate; EU Enlargement;public opinion;SARIO;OSCE;
Summary/Abstract: The year 2005 was unique for Slovakia’s foreign policy. It was the first year of a fullfledged membership in the Euro-Atlantic structures. While 2004 was a year of identification of the post-integration foreign policy priorities, the year 2005 can be characterized as the first year of their implementation. The ambition of the Yearbook is – at the appropriate level and with the possibility of identifying perspective trends – to look for the answers to new coherences that, in a broader European context, are most topical for Slovakia. Twelve authors attempted to find the answer to questions how Slovakia implemented its new priorities in the new environment. This edition of the Yearbook focused on five foreign policy issues characterizing the foreign policy development in 2005, such as the EU and NATO membership, Slovakia’s activities within international organizations and concrete implementation of the foreign policy priorities. The first chapter focuses on Slovakia’s membership in the EU. Aneta Világi, the analyst of the European Integration research program at RC SFPA, deals with the topic of discourse on the EU Constitutional Treaty. She concentrates especially on development of the EU Constitutional Treaty ratification process in Slovakia as well as the impact of the unsuccessful ratification in the Netherlands and France on its further development. In conclusion she suggests for the Slovak diplomacy to use the stagnation period to form its own priorities in case the discussion on further development after the unsuccessful ratification is open. Vladimír Bilčík, the Head of the European Integration research program at RC SFPA, examines the official standpoints of Slovakia towards the EU enlargement and focuses on the main points of discussion on further enlargement in 2005, including the issue of absorption capacity. The second chapter is devoted to the security policy. It is open by an article of the analyst of the Center for European and North-Atlantic Affairs Vladimír Tarasovič. He assesses the key events or changes from the point of view of the EU and NATO. Vladimír Tarasovič also analyzed the most significant security policy documents adopted by the Slovak Government in 2005. The reflection of the mentioned document in practice was analyzed by Miroslav Kysel, an analyst from the Slovak Foreign Policy Association. The analysis of Ivo Samson, Head of the International Security research program at RC SFPA, opens the third chapter of the Yearbook. In his analysis, he focuses on the candidacy and preparation of the Slovak Republic for the UN Security Council membership as well as on the fundamentals, principles, priorities and possible dilemmas of Slovakia’s activities in UN SC. Peter Lizák of the Ministry of Foreign Affairs of the Slovak Republic takes a more detailed look at Slovakia’s current performance and the future prospects in OSCE. The issues in Central Europe are analyzed by Tomáš Strážay, Head of the Central and South-eastern Europe research program. He assesses the key points as well as the problematic issues playing a significant role within the Visegrad Four, the Central European Initiative and Regional Partnership. Tomáš Strážay also attempts to determine the fields of cooperation which the individual groupings could realize in the short as well as medium-term perspective. The fourth chapter assesses implementation of the main foreign policy priorities such as Ukraine and the Western Balkans. Alexander Duleba, director of the RC SFPA, focuses on the relations with Ukraine. He considers the years 2004 and 2005 a breakthrough in the approach towards the Ukraine considering the development of Slovak-Ukraine relations. Moreover, he stresses that only in 2005 did the outlines of Slovakia’s post-integration eastern policy meet the interests of Slovakia, which could significantly contribute to the common EU and NATO policies. The contribution of Eliška Sláviková of People in Peril reflects on the base forming the decision to include the Western Balkans into the foreign policy priorities of Slovakia. It also reflects the practical realization of the policy towards the Balkans. She assess Slovak bilateral relations with the individual countries of the Balkans as well as relations at the EU level and attempts to answer the question where Slovakia could see its working space in the Balkans. Slovakia’s Foreign Policy Tools is the name of the last thematic chapter in the Yearbook. Naturally, this chapter begins with the analysis of the Slovak development assistance as the main bilateral tool of Slovakia’s foreign policy. Peter Hulényi of Ministry of Foreign Affairs of the SR takes a closer look at the Slovak ODA. He analyzes the 2005 success of the Slovak ODA in more detail and, rather than talking about the failures, he points out the challenges Slovak Aid will face in 2006. Foreign economic policy is reviewed by Tomáš Taraba of Slovak Investment and Trade Development Agency. The public opinion on foreign policy issues is traditionally the field which Oľga Gyárfášová of Institute for Public Affairs covers in the Yearbook. Her research outlines that there was a significant positive change in the public opinion on Slovakia’s performance in the field of foreign policy. Besides these analyses, the Yearbook includes a chronology of the most important events in the Slovak foreign policy in 2005 and selects political documents and other information (e.g. the structure and representatives of the MFA SR, a list of diplomatic missions and representatives of SR abroad, the SR diplomatic bodies, army missions abroad etc.). I strongly believe that all those interested in the foreign policy of Slovakia and its development in 2005 will find this publication useful.

Treaty Establishing a Constitution for Europe

The Slovak Republic and EU Enlargement

The Reflection of Fundamental Security Policy Documents in Practice

Regional Initiatives in Central Europe in 2005 – from Topical Specialization to Complementarity of Approaches?

Assistance under the Brand Slovak Aid

SARIO as a Subject to the Foreign Economic Policy of SR

List of Treaties Concluded between Slovakia and Other Countries in 2005

List of the Embassies of the EU, NATO countries and Some Other Countries