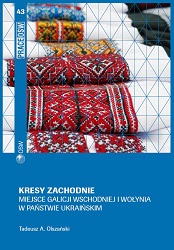 Author(s): Tadeusz A. Olszański
Subject(s): Politics, Political history, Social history, Geopolitics
Published by: Ośrodek Studiów Wschodnich im. Marka Karpia
Keywords: The Western Borderlands;Ukraine;Volhynia; Eastern Galicia; Ukraine’s domestic policy
Summary/Abstract: The western part of Ukraine, the territory of Eastern Galicia, and western and central Volhynia did not enter the Soviet Union until after World War II. In fact, they are two different regions - Galicia and Volhynia have a very different history: Volhynia has always been associated with central Ukraine, Red Ruthenia (Eastern Galicia) has always gravitated towards Poland and Hungary, not towards Kiev. Also today, these two regions are connected - apart from shorter Sovietization - mainly the experience of peripherality. As in the past, as part of the Polish, Austro-Hungarian and Russian states, today, in independent Ukraine, these are peripheral and economically backward regions, and there is no sign that this will change. Lviv, which in the recent past was the mainstay of the Ukrainian independence movement and the center of independent socio-political thought, is becoming increasingly marginalized. Still, these lands are a mainstay of national identity, if only because one speaks and reads almost exclusively in Ukrainian. Here, too, national-democratic and nationalist groups, strongly opposed to any forms of reintegration of the post-Soviet area, have very strong support. This part of Ukraine, directly neighboring Poland, is especially important and particularly interesting to us. It still happens today that we call it "Eastern Borderlands". Among other things, for this reason, as well as due to the fact that within Ukraine it is also a provincial but also "symbolic" region, we have allowed ourselves to define it here as "Western Borderlands".