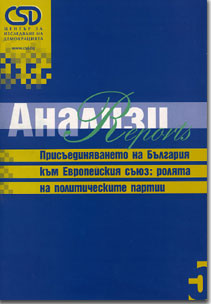 Author(s): Antony Todorov
Subject(s): Politics / Political Sciences, Politics, Social Sciences, Sociology, Government/Political systems, Applied Sociology, Evaluation research, EU-Accession / EU-DEvelopment, Sociology of Politics
Published by: Център за изследване на демокрацията
Summary/Abstract: The process of Bulgaria's EU integration is a multifaceted political, institutional, economic, socio-structural, and psychological process. It is essentially a complex social transformation aimed at establishing particular public structures, standards, consensual attitudes, and strategies, compatible with EU and acceptable to its member countries. This process involves diverse actors who cannot be reduced solely to the efforts of state institutions and above all, of the legislature and the executive. One of the most powerful, though frequently overlooked, channels bringing Bulgaria closer to EU, are political parties. The inclusion of political parties in the domestic political process cannot be reduced exclusively or primarily to the time in which they exercise executive power. In opposition or even outside parliament, political parties can still occasionally exert considerable influence over the conditions in which foreign policy is conceived and implemented. Parties can sometimes be an exceptionally important source for Bulgaria's international image which strongly influences the positions of the country's international partners, and in particular, the EU member states, in terms of Bulgaria's accession to EU. Political parties, along with everything else, have several essential functions immediately related to Bulgaria's integration in EU: • they are very frequently the channels for the introduction of European po-litical standards in Bulgarian politics; • they represent the Bulgarian political palette of strategies and ideas; • they create an additional lobby network among the EU political class in favor of Bulgaria's accession; • they are in position to structure political life in Bulgaria in line with EU standards. That is why the study of the role of political parties in the process of Bulgaria's EU integration is an essential element of the conception of a general idea, and theoretical model, of the process. In theoretical terms, parties are part of the political system and a connecting link between the political, and civil, society. Their role in foreign policy is typically related to positions of power. But the in-ternationalization of party life in the past decade has provided parties with new opportunities for participation in the foreign political process. In Bulgarian political life parties are an important, if not the chief, instrument for assimilation of foreign political experience. Their activity as international actors, their international contacts, the international forums organized by them, are an irreplaceable channel through which public opinion in Bulgaria gets informed about foreign political standards, about the rules and norms of political life in EU countries, for instance. Naturally, the influence of parties on the foreign policy and international image of a given country is a function of its political system and above all, of the role, status, and functions of political parties within it. Since 1989 Bulgaria has developed a "European" type of party system, in which political organizations are institutional structures striving to represent politically significant social interests. Under this model, parties are involved in the domestic political process as representatives of a certain part of public opinion. In the U.S., along with that function, parties are involved in foreign policy mainly through the influence they have in various foundations which sponsor projects and research institutions. In a sense, the American party-system model is based more on the "expert" participation of political parties in the foreign policy making. In Bulgaria there are few elements of expert participation of parties in the foreign political process, though certain "think tanks", related in some form or other to political parties, do exert some influence, largely through developing and presenting before foreign partners alternatives to government policies.