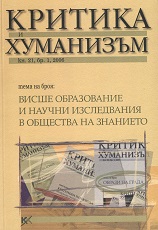 Summary/Abstract: The modern university has experienced three main stages of its development: the universalistic Christian Middle age, the Nation-State building, and the present globalisation. These stages transformed the university from universal intellectual elite centre, to a major instrument of the national community soul building. Now, universities are going to leave their national profile and to challenge new environment, where they have to acquire new entrepreneurial skills. On the other hand, this new situation pushes the universities to essentially answer the growing demand in high education and to modify their curricula according to the expectations of the general public – the possible consumers of the “educational goods”. Obviously, this opposes the main traditional role of the universities as intellectual centres producing new ideas, which often confront the mass attitudes and fight the prejudices. The curricula in political sciences potentially show well this new contradiction between the traditional role of the universities and their present market position. In political sciences, especially when the discipline has grown within the faculties of law, the curriculum is designed to educate elites. But contrary to the widely spread conception, elites are in fact the most conformist part of the society for they demonstrate quite developed skills of survival and adaptation to the societal environment. This is the hidden programme (agenda) of the political science curricula. The text discusses the possible developments of the situation and how universities should answer the challenge: keeping their traditional role of educational and innovative institutions and being in accordance with the marketization of the higher education. The promotion of the liberal arts as core curriculum in every university educational field seems to be one of the possible solutions, because this will keep the idea of universalistic and humanitarian university education. This will also allow universities not to become dependent on the mass beliefs and at the same time to be flexible and responding to the mass expectations.