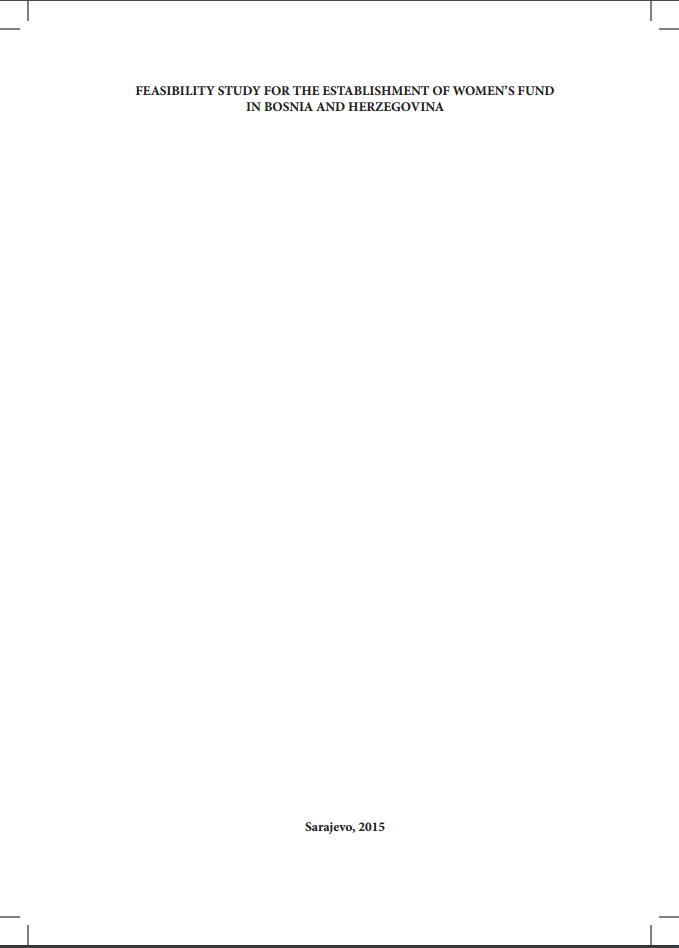 Author(s): Natalija Bratuljević, Katarina Živanović
Contributor(s): Saša Gavrić (Editor), Jadranka Miličević (Editor), Emina Bošnjak (Editor)
Subject(s): Economy, Gender Studies, Law, Constitution, Jurisprudence, Human Rights and Humanitarian Law, Civil Society, Socio-Economic Research
Published by: Sarajevo Open Centre
Keywords: feasibility study; women's fund; BiH; gender equality; rights and freedoms; legal framework; NGO; assessment; possibilities;
Summary/Abstract: This report is the final result of the Feasibility Study (The Study) commissioned by Sarajevo Open Centre and Foundation CURE with the financial support provided by Mama Cash Foundation. The purpose of the Study is to examine the needs and possibilities for establishing the Women’s Fund in Bosnia and Herzegovina. International Women’s funds are instituted on the broadly feminist perspective within the framework of the universality of human rights. They support formal and informal groups of women, engaged actively with their communities. Such Funds empower women and girls to be “the agents of change” in their societies, as well as on the global level. The original idea behind this Study was to examine possibilities for establishing local Fund that would support the development of women’s rights organisation, with equally important goal of securing support to some of the most underprivileged groups of women in Bosnia today, including Roma women, women with disabilities, lesbian/bisexual/transgender women and others. To better understand the key obstacles that prevent women in Bosnia and Herzegovina to access justice and participate as equal in all spheres of public and private life, we analysed in details all aspects of complex political structure, legal, administrative, social and economic barriers and tried to accurately assess the work of both state and non state actors in the sphere of gender equality. Compared to many countries in the region, Bosnia and Herzegovina was the pioneer in passing gender equality legislation and setting up institutional mechanisms for gender mainstreaming on all levels of executive power. However, the improvements measured in everyday life of women are still minor. Women in Bosnia and Herzegovina are victims of multiple rights violations and face tremendous challenges in claiming their rights and acquiring access to justice. This particularly refers to: violence against women and girls (47% of women in Bosnia and Herzegovina, over the age of 15, experienced, at some point in their life, at least one type of violence), sexual and labour exploitation, multiple discrimination, exclusion for decision-making, lack of voice and representativeness. The fact that women in Bosnia and Herzegovina outperform men in higher education is overshadowed by statistical data showing that Bosnia and Herzegovina has one of the lowest levels of female participation in the workforce in Southeast Europe, with only 37.3% of women in the country’s workforce. Women belonging to the marginalised and vulnerable groups are even more exposed to rights violations and less aware of the mechanisms to claim them. There is an overwhelming fear of secondary victimisation and the general lack of trust in justice system. Twenty years after the war, the legal framework for gender equality in Bosnia and Herzegovina is mostly in line with the international standards, but the implementation is still weak while both state and independent institutions struggle with political obstacles, lack of resources and sometimes capacity. Civil society still plays a major role in the development, but the dialogue between the state and civil society organisations was never formalised. Women’s non-governmental organisation as smaller but vibrant part of the civil society, played a major rule during and after the war from delivering humanitarian assistance, to building relationship and contributing to reconciliation, delivery of legal and psycho-social support, opening public debate, mobilising support for legal and institutional changes. Today, there are many women’s rights advocates, dedicated and professional individuals and organisations fighting for equality and women’s empowerment. Our key conclusion is that there is a great need and enough capacities within the women’s organisations, as well as individuals, to support the establishment of a Women’s Fund in Bosnia and Herzegovina in the highest participatory way possible - to secure the ownership and representativeness of various groups of women it seeks to help. It is our firm belief that establishing such Fund locally is the next logical step in the development of an independent, issue-based women’s movement, constructed on the principles of solidarity and equality. We also believe that the emergence of such a Fund, can be a catalyst for the new way of building movements, which can bring the feminist agenda back to the public discourse with renowned clarity, energy and impact. In addition to suggested participation, and re-established connections to the base, the Fund should chose a very narrow niche and consider what are the added values its founders and members bring, in comparison to other existing Foundations. When it comes to the beneficiaries, we must underline the feeling that the assistance to the most marginalised and vulnerable groups, which are traditionally excluded from any decision-making, and which suffer multiple discrimination and other rights-violations - should be favoured. It is vital to prevent further exclusion of these groups in the society from accessing their rights, and that should be a prime obligation of the civil society actors, as well as a great exercise of solidarity.