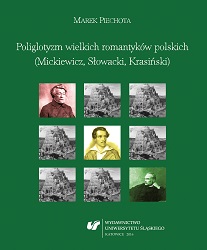 Author(s): Marek Piechota
Subject(s): Language and Literature Studies, Foreign languages learning, Applied Linguistics, Studies of Literature, Language acquisition, Polish Literature, Theory of Literature
Published by: Wydawnictwo Uniwersytetu Śląskiego
Keywords: polyglotism; Adam Mickiewicz; Juliusz Słowacki; Zygmunt Krasiński; languages
Summary/Abstract: The discussion of the polyglotism of the great Polish Romantics is preceded by a Foreword, which introduces the problem of their rich poetic language drawing upon the multitude of languages in which they studied, read and admired various poetic achievements originating in other cultures and traditions than their own. In the nineteenth century, the socio-political situation of a nation without a state, the long-term occupation and partition of Poland, the threat it posed for the Polish language, and the distressing practice of more or less directly forced assimilation of the people meant that the concern for the mother tongue was of a much different import than it is in the times of modern globalisation. The introductory chapter – sketchy but at the same time the longest in this volume – focuses on the etymological ‘fantasies’ of the Romantics. It draws attention to the ease with which both Mickiewicz and Słowacki (but not only these writers) succumbed to the belief that even most fantastic etymological intuitions in any of the languages they were familiar with could be treated on a par with strictly scholarly, disciplined and rational investigations and thus used as tools for studying the reality and whatever lay beyond. Having graduated from the Gymnasium, Mickiewicz spoke the following languages with varying fluency: Polish, Latin, French, Russian, Italian, German and Belarusian. With regard to Ukrainian, Lithuanian, Hebrew and Yiddish – cultures he had come in contact with in his early years – little is known beyond the fact that he knew some words, as he never studied these languages or in these languages. When he studied in Vilnius, he learnt also Greek and English. In Berlin, he listened to Hegel’s lectures in German; he lectured himself in Latin and French when he taught classical philology in Lausanne and Slavic literature in Paris. He also claimed to speak Czech when he applied for a chair at the Collège de France. He might have had some basic knowledge of Serbian, was an expert at Church Slavonic, and learnt to speak and write in Turkish in his late years, which altogether amounts to more than eleven languages. There is no doubt that he was a polyglot, a translator, and a linguist. As a polyglot, Słowacki was not far behind, speaking nine foreign languages with varying degrees of fluency. He spoke French with the same ease as he did Polish and he had a school knowledge of Greek, Latin, Russian and German: he was very good at translating from Latin, he was a fluent speaker of Russian (most of the lectures he attended in Vilnius were in Russian), he studied German-language Romantics in German (especially Goethe and Schiller) and he persisted in his efforts to improve his English. He studied Spanish (although he mostly read in this language rather than spoke it) and he developed some basic knowledge of spoken Arabic. Works that he read in foreign languages proved an important source of inspiration in his own writing (e.g., Shakespeare and Calderón de la Barca). Compared to his two great predecessors, Krasiński appears perhaps less impressive, hence the ‘limited polyglotism’ in the title, followed by the tentative question-mark. Parisian-born aristocrat, he spoke French from his earliest days even more fluently than Polish, and his mastery in the French language surpassed that of the other two great poets. He started learning other languages at home, later to work on them at school and during individual tuition; these included Latin, Greek, German, Arabic, and English. He is certain to have spoken Italian; he also read in this language, although it is not clear whether he was a fluent writer. He liked to demonstrate his knowledge of “The Divine Comedy”, which he often quoted in his correspondence in the original language. Although he made no mention of having any knowledge of Russian, he passed his childhood in the pre-November Congress Poland, which was a half-independent state. The polyglotism of the great Polish Romantics is presented in the modern context of the upsetting tendency of many natural languages becoming extinct. Scholars alarm that for the past century they have been dying out at the rate of one every two weeks. According to the most pessimistic scenarios, 90% of the languages spoken today will have disappeared by the end of this century, replaced by the most common and widespread national or global languages. Polyglots are expected to become extinct too, replaced by ever more effective software. The humanities will die out a few hours later.