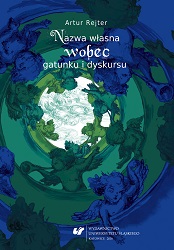 Author(s): Artur Rejter
Subject(s): Language studies, Language and Literature Studies, Theoretical Linguistics, Applied Linguistics, Western Slavic Languages, Philology
Published by: Wydawnictwo Uniwersytetu Śląskiego
Keywords: proper name; genre; discourse
Summary/Abstract: The monograph proposes a description and interpretation of genre and discourse from the onomastic – or to be exact literary onomastic – perspective. Therefore, it constitutes an attempt at bringing together different conceptions of language description and communication, while broadening and enriching the scope of research. The aim of the study is to present certain angles for reading, description and interpretation of the higher levels of communication (text, genre, discourse) in the context of literary onomastics. It purports to describe the process in which proper names co-form the particular levels and areas of communication. The source material is comprised of Baroque literary texts representing different aesthetics and all stages of development within the period. The author drew abundantly from the works of many poets, both major and minor. That approach allowed to arrive at an averaged, relatively holistic and idiolectically balanced image of the epoch. The study includes a theoretical chapter and two comprehensive empirical chapters. The first chapter of the monograph (“Proper name – text – culture”) constitutes a theoretical study of the methodological contexts of contemporary literary onomastics, the text-centric nature of communication as well as a reflection on its essence, the markers of the cultural formation of Baroque, and, last but not least, proper names as elements of cultural memory. Chapter two (“Proper name towards genre. A study of the epigram and related literary forms”) is devoted to the description of the epigram as well as similar literary forms from the onomastic perspective. In particular detail the author discusses the various components of the genre model–structural, stylistic, pragmatic and semantic. The analysis serves to demonstrate certain tendencies and functions connected with the presence of proper names in the text, paying particular attention to the aspects of the genre model. The analysis of the special components of the genre model of the epigram and related literary forms from the perspective of onomastics shows that the particular aspects can be successfully characterised according to proper names. At the structural level, proper names demonstrate, for example, their formative function through their presence in titles relating to the main link. The stylistic aspect is, on the other hand, framed by the cultural and communication category of colloquialism, and, on the one hand – by the markers formulated in poetics and rhetoric of the epoch, which can be identified precisely by the proper names. In the sphere of pragmatics, the onomasticon confirms two primary functions of the genre – ludic and didactic ones. The proper names analysed due to their participation in the formation of the text’s semantic layer reflect the topicality of the matters discussed by Baroque epigram writers; moreover, they convey the varied character of the stereotypes as well as social and cultural cliches of those times. In the following chapter (“Proper name towards discourse”), the author attempts a discourse analysis from the perspective of proper names present within the discourse itself. To illustrate the point, the author discusses two discourses crucial to the Baroque culture –metaphysical as well as erotic and romantic discourse. The onomasticon, interpreted according to its participation in the formation of the level of discourse, displays both markers typical for the culture of the epoch, and – even more importantly – certain extracultural characteristics. The confirmation of that fact can be found in the presence of multiple mythological names and proper names connected with the Christian formation, which could be called topical, especially in relation to the entirety of Old Polish writing. The proper names of both – the metaphysical and erotic and romantic discourses testifies also to the Baroque idea of varietas, which outlined the cultural map of the epoch, regardless of the discourse, even at the peripheries. The observations concerning the onomastics of the chosen Baroque discourses in turn have leaded to the conclusions that specific affinity and kinship of the genre and discourse, since both of them oftentimes cannot be separated. The richness, but also certain standardisation of the Baroque onomasticon remains closely connected with the cultural characteristics of the epoch. Baroque was, in fact, an extremely complex system, not only within the sphere of ideas and discussed topics, but also that of aesthetics and roles of expressions, which could be interpreted from the perspective of social communication. Moreover, while speaking on the subject of the Baroque, one needs to consider the longevity of the epoch, its rhetorical conventions, but also – the other extreme – the transgressive tendencies, search for new solutions, strong individualisation of languages and cultural programs of the epoch. Many of the discussed markers of genre and discourse, described from the onomastic perspective, could be also found in texts representing other epochs in the history of the civilisation. It, in turns, demonstrates the universality as the quality appropriate for the human civilization.