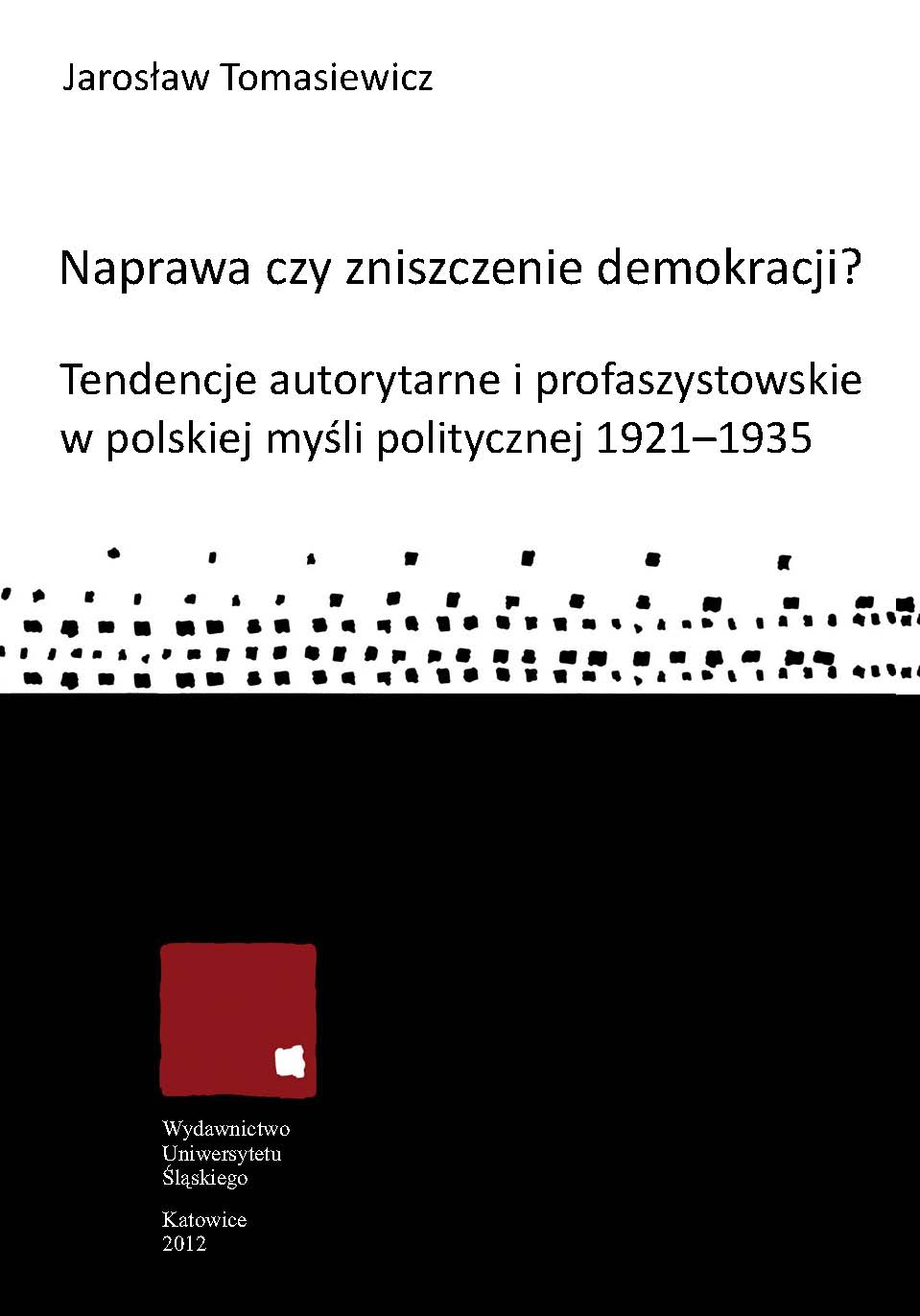 Author(s): Jarosław Tomasiewicz
Subject(s): History, Political history, Social history
Published by: Wydawnictwo Uniwersytetu Śląskiego
Keywords: democracy; pro-fascist tendencies
Summary/Abstract: This work is a synthetic presentation of authoritarian and pro-fascist tendencies appearing inthe Polish political thought between 1921 and 1935, tendencies resulting from the crisis of a liberalparliamentary democracy getting stronger (not only in Poland) in the interwar period. Afterregaining independence, the realities of parliamentarism did not overlap with hopes and expectationsharboured so far that is why disappointment with democracy started to germinate in differentenvironments. In the first half of the 1920s the slogans of a withdrawal from democracy remainedrare and tentative, and, in general, constrained to postulates of a temporary facilitation ofthe institution and democratic mechanisms. The 1926 was the breakthrough. The awareness of thedemocracy crisis has become common. Despite this, authoritarianism initially seemed a temporaryphenomenon. In the 1930s, Great Economic Crisis deepened disappointment with democracymaking what was initially an exception to the rule a rule. The harbinger of the new epoch was thebirth of the National Radicalism.The first chapter is devoted to terminological issues, and explains the notions of demoliberalism,authoritarianism and totalitarianism used in this work. The second chapter describes thebases from which authoritarian tendencies were born in the interwar period, namely criticism ofdemocracy to be found in the Polish political thought of the 19. century. Next chapters presentantidemoliberal conceptions of fascists in the 1920s, conservatives, national democrats, Christiandemocrats, Piłsudski’s camp, national-workers movement, agrarian movement and Marxistgroups, as well as esoteric circles, Pan-Slavists, eugenic activists, technocrats, war veterans, and,finally, National Radicals from the beginning of the 1930s. Both system solutions proposed in theirpolitical thought and their ideological justification were examined. An alternative to a parliamentarydemocracy took on different forms. One can see here a variety of propositions: from insignificantcorrections of the democratic system to its total negation. “Old” national democrats, someconservatives, Christian democrats, agrarian populists, and initially Piłsudskites were limited tothe reform of parliamentarism with maintaining its fundaments. Authoritarianism was representedby “young” national democrats of the Obóz Wielkiej Polski (the Greater Poland Camp), anda majority of conservatives. After 1926 it was a direction in which the reform moved. Totalitarianismdid not have many followers.Reform proposals showed far-reaching similarity: reinforcement and independence of the executive,reorganization and restriction of the role of the Parliament, and, finally, corporatist systembased on organized social groups were postulated. What was different, on the other hand, wasthe justification of these projects. The national democrats wanted to protect the interest of the ethnicPolish nation. Piłsudskites and conservatives accentuated the necessity to provide the Polishstate with power (and, thus, the possibility of expansion). The latter, with Christian democrats,motivated their postulates with a defense of a traditional social and moral order. According to theleft-wing activists, strong authority was also to be a tool of nation modernization and conductingsocial reforms. The most peculiar explanation was given by esoteric groups, according to whom thechange of the political system was to serve the fulfillment of moral and metaphysical aims.