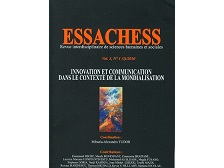 Summary/Abstract: The population in the most Mediterranean countries, particularly in Algeria, is concentrated to the urban communities, cities with more or less importance, urban and coastal regions. This trend of rapid growth of the urban communities leads to multiple consequences both economically and socially on the use of resources and their distribution. The urban is the area where cross the resources, the population and the production activities and yours management. To analyze the corruption as a phenomenon triple (economic, social and institutional) through an urban community (as Annaba’s case in this research) it may well prove very fruitful in terms of lessons on this central phenomenon and its impacts in the North African countries.