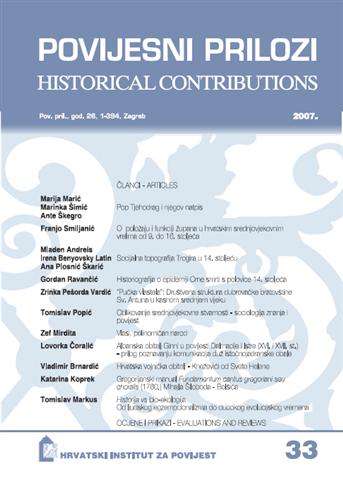 Vlasi, polinomičan narod
Wallachs, a people of many names

Summary/Abstract: This paper succinctly discusses the history of Wallachs from the earliest historical record to the end of the twentieth century. In contrast to the original name ‘Wallach’ (also Walach, Wallachian, Vlach and Vlachian), the term ‘Arumun’ for ethnic Wallachs in the Balkans emerged as late as the eighteenth century. The etymology of the name ‘Wallach’ is tightly bound up with the ethnogenesis of Wallachs. It is commonly assumed that the ethnic name Wallach is derived from the term Volcae, which was the name of a large Celtic people that, together with the Tectosages tribe, arrived to the territories of the Thracian tribe Besi in the Balkans through the territories of Dardania, Thrace and Macedonia in 280 and 279 BC. The long process of the Wallach ethnogenesis was also influenced by the immigrating Scythian peoples as well as Ital colonizers. The amalgamation of the diverse ethno-cultural elements continued even after the arrival of Avars and Slavs. The author concludes that Wallachs, although mixed with other ethnicities and cultures, are a separate and unique autochthonous palaeo-Balkan people that had never lived in the community with Romanians north of Danube. In the discussion on the input of Wallachs in the Byzantine history, the author states that the name ‘Wallach’ is first mentioned in the tenth century. In the earlier era, from the Karakala edict (212 AD) onwards, Wallachs had been included within the Greek name Rhomaioi. As Wallachs began to leave that community, the name ‘Wallach’ started to appear in Byzantine texts. This is a consequence of their individualization and is, at the same time, a sign of their definitive entry into European history. It must be stressed that Byzantine authors used the term ‘Wallach’ in its ethnic meaning. The typical form of the Wallach social organization is a collective, ‘zadruga’, in Wallachian ‘falkara’ and ‘katun’. These temporary settlements are characteristic for social organizations in steppes. The people known as Wallachs in Romania and Moldova inhabit large areas of the Balkans and are called Arumuns in Greece, Albania and Macedonia; Megleno-Romanians around the Macedonian-Greek border; and again Wallachs in Pindus – Olympia region. From this region, Wallachs began to migrate in the early era of the Turkish invasion. Early on, Wallachs practiced Christianity of the Latin (Western) Rite, but in a later period Bulgarians forced upon them the Eastern Rite Christianity and the Slavic language. To control them both spiritually and politically, the emperor Basil II tMurderer of Bulgarians founded in 1020 an independent episcopy for all Wallachs in the Balkans. Its headquarters were in Vranje and it was under the jurisdiction of the Ohrid arch-episcopy. Religiously, Wallachs were Arians or Semi-Arians. Their belief system, rich with Pagan elements, made their religious conversion less problematic. They first converted to the Bogomil faith and then to Islam. Turkish sou

Prikazi Reviews 2000 Vlasi u jugoslavenskoj historiografiji Yugoslav Historiography in the Service of Ideology, the Example of Vlachs 2002 Vlasi u historiografiji Vlachs in the Historiography 2004 Religije i kultovi Dardanaca i Dardanije u antici Dardani and Dardania Religion and Cult in Antiquity 2007 Mbi Botimin e “Historisë Së Skënderbeut” të Marin Barletit në Zagreb më 1743 On the Publication of "The History of Skanderbeg" of Marin Barleti in Zagreb on 1743 2011
2022 © CEEOL. ALL Rights Reserved. Privacy Policy | Terms & Conditions of use
ICB - InterConsult Bulgaria core ver.2.0.0914