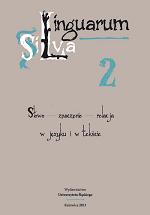 Summary/Abstract: Both the conception of a cyclic and linear time assumes the possibility of its segmentation and determining temporal units. Also, the length of action duration, presentable on the time axis in the form of a segment, can be divided into smaller temporal intervals or phases: an initial, intraterminal and final one. Polish includes many linguistic determinants of the category of phasing; it is most often (primary and secondary phase, as well as prefixal and non-prefixal) verbs and analytic construction that give information on the action phase. The latter comprise verbo-nominal analytisms (AWN) where the function of a verbalizator is performed by, among others, immediate verbs (primary ones referred to as meaningful and non-phase). The article presents the constructions of this type, expressing an immediate initial and final nature. The AWN in question were divided according to the semantic parameters and the construction type entitled to them (being a verbal group/main agreement in structure). Also, conceptual metaphors, allowing for stating how the beginning and the end of actions is expressed by means of the AWN under investigation.