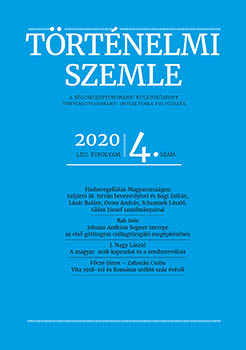 Summary/Abstract: The study seeks to answer two questions: first, what role did the supply of the troops of the imperial army stationed in Hungary play in the grain trade; secondly, how significant was the grain trade concerning the provision of army in the eighteenth and the first half of the nineteenth century. As there were not enough barracks, most of the soldiers were quartered with peasants, who also had to provide catering below the market price. Consequently, markets did not play a major role in supplying the military. Even the consumption of the 60 000-70 000 soldiers was of no great importance, as it made up only 1-2% of the grain production. Nevertheless, the demand of the army facilitated the sale of grain in areas where the peasants could not sell their crops. During the Napoleonic Wars, in the late eighteenth and early nineteenth centuries, the importance of military demand temporarily increased. The financed war-needs caused an economic revovery, which however end up in a recession at the end of the war. After that military consumption no longer played a part in the development of the following decades.