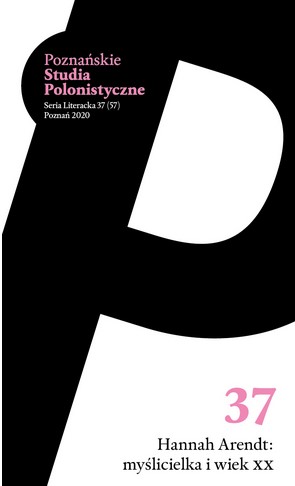 Summary/Abstract: The article is an attempt at capturing the relationship between the lives and creative attitudes of Rahel Varnhagen, Hannah Arendt and Judith Butler. Starting with Varnhagen’s biography written by Arendt, the essay’s author wonders about the philosopher’s writing strategy. Instead of a classic reconstruction of life, the biographer offers a collage of excerpts from Rahel’s letters with extensive commentary. This form encourages one to read Rahel Varnhagen as a narration about the author and her own struggle with Jewish and female identity. The second relationship analysed in the essay is the impact of Hannah Arendt’s texts on Judith Butler’s writings. Despite the criticism of the philosopher’s writings, Arendt remains an unquestionable inspiration to Butler. The article also emphasises the difference between the theoreticians: Arendt uses the strategy of mimicry (writing about identity in the form of a German Jew’s biography), while Butler writes a politically-engaged text, exposing herself and her identity.