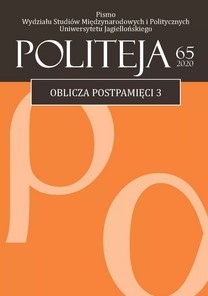 Summary/Abstract: Although originally the term ‘post-memory’ referred to the experiences and memories of the survivors that influenced the biographies of their children, in the following years its meaning was extended and the concept started to be used to describe the processes of transmitting the memory of any traumatic experience within any group, not necessarily bound by blood. In the case of Lublin, where one third of the pre-war community consisted of Jews, most of whom were murdered during World War II, the position of non-Jewish vicarious witnesses seems to be particularly important. This article discusses some aspects of the Holocaust post-memory discourse referring to the cultural activities of the ‘Grodzka Gate – NN Theatre’ Centre. Research questions will concern the artistic language and means of expression of these projects as well as the aesthetic codes that are being used by vicarious witnesses.