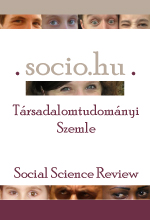 Summary/Abstract: This paper explores how the everyday practices of a workfare policy (the Public Work Scheme) are influenced by the concept of “normal life” and “normal labour” among the inhabitants of the small Hungarian former industrial town where I conducted my ethnographic fieldwork. The paper studies the changing roles and functions of the Public Work Scheme during and after the economic crisis. It presents how a typical workfare policy – in our case, the Public Work Scheme – shapes the life strategies of those people who live in precarity. I will argue that the public work scheme can be interpreted as a policy that aims to sustain the norm of stable and permanent wage labour during times when fulfilling these norms is very difficult. The article explores the role that the PWS has played in sustaining the norm of permanent wage labour, during and after the 2008 economic crisis, and how this process affects classed-based ethnic distinctions and the gender division of labour within the nuclear family.