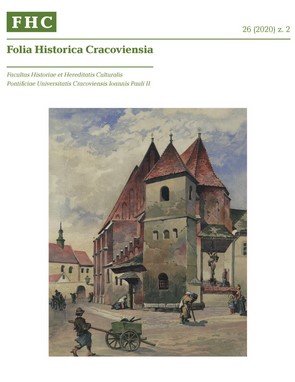 Summary/Abstract: In 15th–16th centuries, Krakow University developed fundamental elements of its memory culture and historical awareness. In the first half of the 17th century, the Krakow academic community strengthened its message concerning its past. Occasional literature, in particular panegyrics, was a particularly important medium of this message. Numerous academic prints were dedicated to Krakow bishops, since they were the University’s chancellors, and frequently its alumni and supporters, while the University itself was one of the key institutions in the diocese, closely related to the Church. The panegyrics were created mostly to celebrate the award of bishopric, a ceremonial entrance of a bishop to the city, an ingress to the Wawel Cathedral or were written in the event of death and the funeral. Seven bishops ruled the diocese in the analyzed period. In that time, university professors and students dedicated a total of 65 panegyrics to them, of which 43 contained references to the University’s past. Panegyrics were a medium of the University’s institutionalized memory culture. Key facts and persons mentioned in the works include: the foundation of 1400, founder King Władysław Jagiełło, House of Jagiellon as the dynasty of founders and representatives of the golden age in the University’s history, Jan Kanty – a revered professor of theology (deceased in 1473) as an exemplary lecturer and patron of the University, as well as catalogues of renowned professors and alumni of the University. The catalogues were in fact lists of surnames, and they were supplied as an evidence of the University’s long history and service to the society, the country, and the Church.