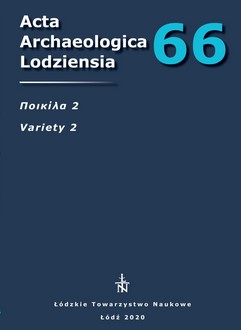 Summary/Abstract: The main aim of this work is to show what fireplaces looked like in the Middle Ages, and more importantly, what functions they could have performed. In the archaeological literature until now, it has been claimed that they were not kitchen hearths, but could only be used to heat meals. In this paper, I show that this claim is unfounded. A long search for suitable illustrations led to the discovery of a number of unique representations of fireplaces. Thanks to its frequent presentation in medieval painting, significant differences are noticeable in the way of presenting material culture and its details. The analysis presented in this paper made it possible to identify one more important issue concerning fireplaces that has not yet received any comments. So far, it has been emphasized that religious-themed performances are marked by symbolism and show typical scenes in a fairly unified way. Other ways of presentation of religious scenes have not been taken into account. Scenes showing saints in manuscripts present them in more everyday circumstances than in the panel painting. Unfortunately, such images are extremely rare, here I present one of the more interesting scenes at the fireplace – the Holy Family having dinner.