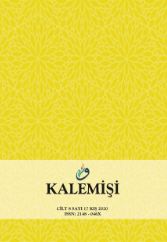 Summary/Abstract: Kütahya has been successfully carrying on the quality of being an important ceramic center with its traditional tile production, unique shape and variety of patterns since the 14th century. Kütahya has continued the production of traditional tile from the past to the present day, and in the 17th and 18th centuries it has given the most original and mature examples. It has been observed that, 18th century tiles have an important source in terms of archiving and examining these unique works in the hand-painted stamps on the tiles, in addition to the unique pattern and variety of shapes. Stamps used in Kütahya tiles respond to important technical and sociological information, such as when, by whom, and where the tile was made. For this reason, the marks on the 18th century Kütahya Tiles are thought to be an important symbol in terms of understanding the roots of our culture. When Kütahya Tiles, one of the most important symbols of local culture, are associated with the symbolic marks they possess, it is thought that this tradition, which has survived to the present day, has formed an important source in the study of social infrastructure. In this study, 18th century stamps containing shape, symbols, inscriptions and monograms in Kütahya Tiles were examined. These stamps are examined visually and symbolically and divided into four chapters; written in Ottoman, written in Armenian, monogrammed or signed, containing various shapes and symbols, and both written in Ottoman and contain symbolic shapes.