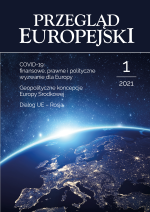 Summary/Abstract: The rising significance of the far-right as political actors is one of the most noticeable political trends in Europe within the recent decades. It causes constant research activity aimed at the analysis of the nature of public support of right-wing forces. However, the researchers, dealing with the issues of assessing the public support of the far-right in different European countries frequently have confront the problem of lack of relevant measurement tools, as well as efficient methodology for valid cross-country analysis. This stems not only from different “political background” and “political environment”, connected with political traditions and political practices, but also from the nature of public support of the far-right, having not only “overt”, but also “covert” component. Whereas “overt” component is on the surface and is good measurable (mainly by conventional tools such as polling), the “covert” one, encompassing the in-depth social sentiments, is hardly measurable. This pose real problem for assessing the genuine amount of public support far-right forces taking into account the fact, that “covert” component is to be crucial in achieving that goal. In October 2020 to tackle this problem by the international group of researchers there was initiated the research project, aiming at the development of the specific research methodology on the combination of traditional and “digital” research methods such as comparative analysis, expert interviews and “social media listening” (SML) for analysing the xenophobic and anti-immigrant sentiments in three European societies – in Germany, Poland and Russia - as a “covert” component. The accomplishment of the research project is expected to provide not only the insights into specifics of the public support of the far-right in different European countries by assessing the “covert” component, but also help to assess its genuine (gross) scale as well as to single out the factors influencing the public support of the far-right by putting emphasis on the ongoing political, economic and social processes. The research project is expected to deliver the information for elaboration of the gauges (indicators) for valid cross-country analysis of the far-right politics in different countries allowing to overcome some research “weak points” – ranging from huge differences in political traditions to scarcity of relevant data. The aim of this article is to present and discuss the elaborated methodological approach.