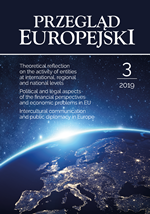 Summary/Abstract: One of the most remarkable features of regional development in Eurasia is the competition betweenthe European Union (EU) and Russia within the so called “contested neighborhood”, e.g. the post--Soviet space. Originated in the 1990s it gained the special momentum in 2000s after the beginningof the Russia-led “Eurasian integration process”, leading to the creation of the Eurasian EconomicUnion (EAEU) in 2015. That fact brought the competition between the EU and Russia to the newlevel, e.g. the “integration race”, which had the strong impact on the whole post-Soviet space. Themost obvious outcome of that process is the outburst of the Ukrainian crisis in 2013, which on theone hand contributed to further exacerbation of the EU-Russia relations, on the other – it pavedthe way to elaboration of the new forms and tools of the integration activities. However, it failed tobring the “integration race” between the EU and the Russia-led EAEU to the standstill. Being in thelatent “crystallisation” phase, this process goes further with the covert competition between theintegration blocks. Its actors are not only the non-aligned post-Soviet states, but also the existingmembers of the integration structures. All the mentioned above factors makes the “new edition” ofthe “integration race” rather dangerous because further acceleration of such a competition can leadto the large-scale rivalry between the EU and the EAEU, which may cause unpredictable consequences.