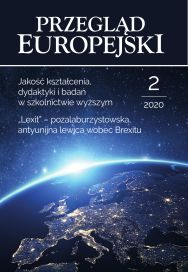 Przegląd Europejski is a scientific open access journal published since 2000 by the Faculty of Political Science and International Studies of the University of Warsaw. The quarterly magazine publishes mainly original peer-reviewed scientific articles. Additionally, not-reviewed materials are also published such as essays, monograph reviews, reports, and comments.

We publish among other research results in political sciences and administration, law, international relations, economics, sociology, and broadly defined European studies. Our primary goal is to deepen the scientific discourse in the theoretical sphere as well as to present the methodological perspectives useful for European studies. Furthermore, published articles and research reports take into account local and regional perspectives, due to their authors’ in-depth knowledge of the historical, social, legal or cultural context.

Articles are published in English (two issues per year) and in Polish as well as other foreign languages (including Russian, German, Spanish and others).

Each issue of Przegląd Europejski is divided into four sections: