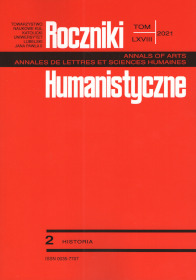 Summary/Abstract: The chief research goal of this article is to answer the question what was the role of the Prussian Ministry of the Interior in the implementation of the Prussian “Polenpolitik.” On the basis of the preserved (even if incomplete) internal regulations and organisational plans of the ministry, I explore the Ministry’s decision-making mechanisms when the “Polish affairs” were considered. I also try to determine which specific persons in which departments made the hundreds of decisions which contributed to the officially adopted framework of “Polenpolitik”. The research problem is all the more complicated because the preserved hierarchical structure of the Ministry files, stored in the Geheimes Staatsarchiv in Berlin, does not correspond to the structure of the departments in which they were created. The present structure must be attributed mainly to registering offices, where individual files were compiled in volumes, to which titles and structural affiliation were assigned. The presented article consists of three parts. In the introductory part, I explain that the Ministry of the Interior, as the supreme authority for police and field administration structures, bore the main responsibility for the realization of “Polenpolitik” in governmental practice. In the second part, I shortly examine the careers of senior officials of the Ministry in order to answer the question whether their administrative experience in the eastern provinces and their contacts with the Polish population in any way determined the direction and continuity of “policy for Poland” in the ministry they headed. I devote the last part to the Ministry’s organisational structure and its evolution in the period in question. The considerations are focused on those substantive departments, which made decisions on “Polish affairs.” In the concluding section, I emphasize the frequent rotation of the ministers and their scant experience of administrative work in the provinces inhabited by Poles (Ostmarken), which suggests that they were not the main factor in the direction, continuity and determination of the Germanization policy towards the Polish minority. I notice these factors in the very structure and functioning of the Ministry’s core departments. At first, “matters of Polish activism” (Polenagitation) were at first processed in one department that dealt with the problems of the socialist and the anarchist movement and the Welfen (Hannoverian) separatist movement and one in Denmark. This was because all of them were equally regarded as a threat to state security. With the radicalization of Germanization policy, from 1908 onwards the matters of “Polish activism” were dealt with by a separate department, headed by the same Dezernents until 1918. He was supported by two dezernents of police departments (general state police and political police). Overall, between 1908 and 1918 only three persons made decisions on Polish matters, which I see as the continuity and consistency of the anti-Polish policy of the Prussian government.