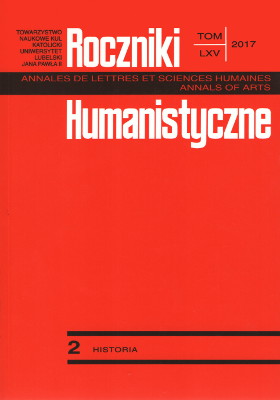 Summary/Abstract: The election of Florian Stablewski as Archbishop of Gniezno and Poznań was a result of many circumstances and decisions, directed mostly by the Prussian government. After Bismarck’s resignation in 1890, the Prussian authorities declared their readiness for ‘reconciliation’ (Versöhnung) with the Polish political elites in the Prussian partition, but with only the smallest possible concessions on their part. The nomination of the Polish candidate for archdioceses orphaned after the death of Juliusz Dinder was to be the first test of both parties’ intentions. An experienced politician such as Rev. Stablewski perfectly understood this and after rejecting Likowski’s candidature, he made public gestures towards the authorities, which were taken as an explicit declaration of loyalty and willingness to cooperate. Political support or even an inspiration for Stablewski was the political camp of Poznań conservatives led by Józef Kościelski, who personally undertook to force this candidate through at the Berlin court.The government, however, did not want to strengthen or make the Polish political camp independent. Therefore, upon expressing readiness to nominate Stablewski, they wanted to further maintain the status quo in Church and religious policy. A written commitment of the candidate to comply with these principles was to guarantee his full loyalty in the future. However, the declaration written by Stablewski was only an expression of his generally known and publicly expressed attitude of legality and loyalism. He reserved his full obedience only to his Church superiors: Cardinal Ledóchowski and the Pope.