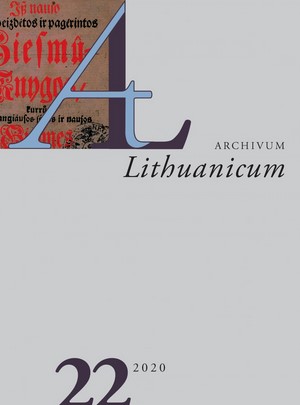 Summary/Abstract: The society of the first Republic of Lithuania was not homogenous in its national and cultural self-perception. Although most intellectuals associated national culture exclusively with the cultural heritage of ethnic Lithuanians and Lithuanian-language writing, a part of the Lithuanian society’s elite opposed the ethno-linguistic approach to Lithuanian culture. One of the most prominent opponents of cultural ethno-nationalism in the first half of the 20th century was the literary historian Mykolas Biržiška. As the basis of national literature, he considered the society of the Grand Duchy of Lithuania (and that of the first half of the 19th century) to be more important than language and therefore, he developed a multilanguage conception of Lithuanian literature as an alternative to the ethno-linguistic one. At the center of the canon of national literature, as formed by Biržiška, is the work of the world-famous poet Adam Mickiewicz. Realizing that in order to spread the concept of national literature to the public, it was necessary to first introduce it into schools. Biržiška made an effort to develop the national curriculum for Lithuanian literature according to the model of the history of Lithuanian literature that he created. To this end, he participated in the preparation of the curriculum for Lithuanian literature and made efforts to ensure Mickiewicz’s canonical position there. Biržiška also produced methodological material for schools (including selected works of Mickiewicz).