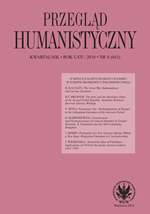 Summary/Abstract: The article analyzes the mythologization of Kaunas, the temporary capital of Lithuania,in the Lithuanian literature of the interwar period. The methodological approach of theresearch is based on the research methods of urban mythopoetics by Vladimir Toporov andthat of topological semiotics by Algirdas Julien Greimas.Due to objective historical and social circumstances, the formation of the Lithuanianurban literature started only at the beginning of the 20th century. The intensive period inthe urbanization of the Lithuanian literature was that of the interwar period when literaryreflections on Kaunas started gaining certain dominant symbolic images of the city, repeatingplots and characters typical of Kaunas. The literary myth of the temporary capital asa pernicious city which becomes a moral trial for an individual is revealed in the articlethrough the analysis of Part III of the novel Altorių šešėly [In the shadows of altars] byVincas Mykolaitis-Putinas, the most prominent Lithuanian novelist of the interwar period.